Skip to main content
Labels
Posted by Duchesse May 14, 2019

Rant: Is She Really Going Out with Him? 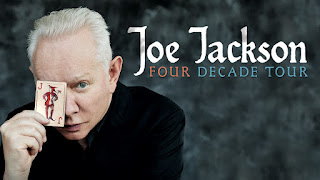 Le Duc and I went to a concert, which is a risky bet for us. Le Duc has a significant hearing impairment, and unless he is in a great seat in a place with superior acoustics, the evening is lost on him.

So, we shelled out for seventh row seats for Joe Jackson, who was performing at Theatre Maisonneuve in Place des Arts, on his Four Decade Tour. Theatre Maisonneuve has both excellent sight lines and sound. Still, we were unsure how it would go; sound quality would also depend on Jackson's tech support.

Shortly after the concert started, along came our next-seat neighbours, a man of about fifty with a woman a dollop over thirty.  The man immediately demonstrated an in-depth knowledge of Jackson's oeuvre, bellowed in a state of enthusiastic inebriation. And he stood to sing, sloshing his drink. The man in front of him felt the sprinkling, turned around, and told him to sit the f down. He did.

For the rest of the evening, his date and he conversed frequently, at full voice level. I was able to move to an empty seat on the other side of Le Duc, who finally lost his patience and advised her, "Vos geules, tabarnac!" (Translation, "Shut your traps, for cripes' sake!")

Sing, if invited. But who wants to hear a stranger's rendition of Jackson's New Wave, jazz-inflected classic, "Is She Really Going Out with Him?" except for the cheeky bit when Jackson calls "Look over there!" and audience responds "Where?"?  His date was really going out with him, and I felt sorry for her... until she started texting.

Where are the ushers? Why is a request for civility left to someone in the next seat? I have seen staff at Place des Arts crack down on phone videorecording and photography, which is in the performer's interest, but why not attend to the concert-goers' experience?

The night wasn't ruined by a long shot; Jackson and his band were superb and Le Duc could hear every note.

A show like that is not the same as a classical music recital where the performer might stop or admonish the crowd if there is a cough or rustle. So I can lighten up and adjust my expectations for the type of music, but at the same time, if a fan wants to set himself free, he should stick to outdoor events where no one expects to hear an unimpeded set.

"Cause if my eyes don't deceive me, there's somethin' going wrong around here."

Venasque said…
I feel your pain sister. To be honest Mr. V and I rarely go out - to concerts, to theatre, to restaurants. Because it's all about me, all the time. The music in restaurants is loud and thumping, people generally don't control their children, when you're at the theatre they talk and text (or worse, check what's happening on Facebook) during the performance and generally it's all a miserable, yet pricey evening out. There seems to be no understanding of the expected difference in behaviour when in public vs private. And none of this is because I'm older now, I've always felt this way. Now I'm not paying to be irritated.
May 14, 2019 at 8:24 AM

Duchesse said…
Venasque:We now dine (in the evening) unfashionably early in restaurants, to avoid peak noise. "Choosing a quiet restaurant" is about impossilbe, unless it is so mediocre that it has hardly any patrons. As for concerts, very few persons display the greatest-hits-of-incivility this couple did. I believe a venue should add a request for quiet during the performance— as well as the usual announcement that prohibits use of devices.

LauraH said…
Agree wholeheartedly. Poor behaviour at musical/artistic performances never seems to attract the attention of the staff, just as you say. Aside from talkers, my biggest peeve is the cell phone users. Using it in a darkened hall is like shining a flashlight, incredibly distracting and rude. But like you, I prefer to keep going while I can:-) And restaurants seem to be quieter at lunch which suits me better anyway.
May 14, 2019 at 9:12 AM

lagatta à montréal said…
Duchesse, tomorrow two friends (including the recent widow) and I are going to the tiny Thai-Lao restaurant Thai Sep, a bit east of here. The food is very good and it is not at all expensive (and a byow - taking a good bottle) but it is tiny so it gets very noisy by 7 pm, not because of noisy clients, but a lack of proper soundproofing. So yep, we're going at the unfashionable "Early-bird" hour.

Duchesse said…
LauraH: Maybe concert halls should post a number and patrons could summon an usher. They would then say at the beginning, "Due to complaints about the distracting use of cell phones, we ask patrons to text us at this number if you are being disturbed by their use. Use of an illuminated screen is not permitted." (Anyone who must be contacted can set his or her phone to vibrate and exit to take a call.)"

You would have to use phone to text the usher but so many persons are already on them. I would have had to push past a long row of people during the performance, to find an usher to deal with the man. I thought of doing it. The woman next to me was reading her mail.

lagatta: LOL, and thre was no intermission in the nearly 2-hour concert.

Laura J said…
At a classical music performance a few years ago the soloist improvised whey someone’s cell rang a little tune — brought the house down! We now often opt for lunch as a meal out and embrace the chaos if going out for cocktails by sitting at the bar! Indeed we have sometimes just opened a restaurant door and tired away from the wall of sound.
May 14, 2019 at 1:51 PM

Mary said…
Last US concert I went to, the gentleman (not) next to me decided that he didn't have enough physical space in his own seat so he overtook a good portion of mine by manspreading. Kept shoving his foot, leg and arm up against mine and encroaching on my space. I tried to shove back, but he didn't seem to noticed. He talked loudly with his (equally) inebriated mates during almost the entire concert and even talked 'at me' telling me how much fun he was having. Did not notice my displeasure, nor respond to my requests for him to stop talking during the music.

LauraH said…
Me again. I truly believe that screens are addictive. Like the woman you mention who was reading her emails during a concert which, I assume, she paid a fair amount of money to attend. Saw the same thing at a recent performance here. A woman across the aisle literally could not put her phone down, she kept picking it up all through the performance, it was compulsive. She left at intermission so I wasn't able to speak to her. The disrespect to the performers as well as other audience members is beyond my understanding.
May 14, 2019 at 2:45 PM

royleen said…
Agree wholeheartedly! I have resorted to asking people to shut up or leave, in many different venues. Worst was a couple who talked through most of the first 30 minutes of Hamilton, in London a while ago. That is not a quiet musical! They gave me dirty looks but finally shut up. I also ask people to put their phones away. My husband is more tolerant but my blood starts boiling! Why oh why did they even bother to buy a ticket?! Only totally quiet experience I have had lately was YoYo Ma at the Hollywood Bowl, playing Bach sonatas for cello. You could have heard a pin drop. Heaven!
May 14, 2019 at 5:21 PM

I share your pain. A jazz Christmas Concert at a jazz bar/restaurant was ruined by two drunken late shows who sang along, and babbled together during the second set. I tried a couple of Shhhhs! but they were oblivious. We asked the waiter to have a word with them - he declined. When it was over, my husband gave them a piece of his mind. They were surprised. When the venue emailed me "How did you like your experience dining at XYZ?" I let loose. I suspect that will be our last visit there.

Duchesse said…
All: Thanks, I am not alone! There are some areas where I am going to let my elder flag fly and shushing people who talk or use phones intrusively is going to be one. Really do not want to be a peevish person but that puts such a dent in one's enjoyment.

Emma: Anywhere where there is a bar, plus music, you are going to have talkers or rustlers as people eat and drink during sets. But inebriated singers?! Way over the line. Good for your husband and I hope they learned something from that.
May 15, 2019 at 7:50 AM

JohnInWI said…
My son recently attended an OSM concert at Maison Symphonique, The Planets by Gustav Holst. His favorite orchestral piece. He reports the acoustics there gave him goosebumps. I suspect the audience was better behaved ;) -Lily
May 15, 2019 at 12:31 PM

Duchesse said…
Lily: Certainly the type of performance can draw different audiences. One of my friends loves to tell how his fiancé shushes people at the opera... in their seats, •during the intermission•, Maison Symphonique is a stunning hall.