The September 20, 2010 New Yorker contains "The Merchant" by Nick Paumgarten, a profile of Millard "Mickey" Drexler, CEO of J. Crew, currently the most famous merchandiser in the world.
Tucked between some tedious store visits and the tale of Drexler's emotionally sterile, sad childhood are some gems about how merchants think:
"A merchant is someone who figures out how to select, how to smell, how to identify, how to feel, how to time, how to buy, how to sell, and how to hopefully have two plus two equal six," Drexler told me.
"We buy and sell goods. We buy low and sell higher– that's all we do to make a profit. But I consider a merchant someone who has a certain intuition and instinct, and–very important–knows how to run a business, knows the numbers.
Does the merchandise speak to you numerically? There's a rhythm. You see goods as numbers.
And the numbers have to work out."

The 'merchant gene' is like the 'go fast gene' of Formula One racers: you have it or you don't. A good merchandiser is a conjurer, spinning a web of delight and longing with only a few tables and racks and an artful assortment.
Conversion, the piston for sales, is a key measurement. Conversion is the percentage of buyers vs browsers- in other words, how much of your traffic actually buys. You've probably heard about all the tactics to increase buying behaviours: scents, table displays, promotions, free coffee.
But these days, people are so much more resistant to buying; I've seen downright surliness as browsers flip price tags. Conversion is maddeningly difficult: traffic is down, the average sale, lower. Don't feel entirely welcome? If conversion stats are low, the merchant isn't getting much sleep, but the theatre of retail requires him or her to act relaxed. 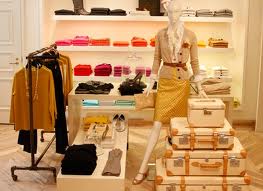 A woman asked the saleswoman at a large uspcale department store if a jacket (already double marked down) would be reduced further. "No", the saleswoman replied, "the store has to make some money." The woman stomped off.
Yeah, I thought, if we want the store to be there, we have to let them make a profit.
At another point in the article, Drexler pushes his team to produce a piece at a lower price, to give value– make a profit, but not markup too much: "three times, not five".

Read the piece to know what it's like on the seller side of the fashion fence. Drexler personifies merchandising mojo–what customers think of as a hustle, and practitioners as a calling.

Rubiatonta said…
Retail fashion is such an interesting world -- it's one of the last bastions of story-telling, in that sellers are offering us a story about who they are, and we have to decide how we fit into their story, if at all.

I think the most successful retailers are the ones that have a strong story, keeping it current but at the same time keeping it consistent. Even with market pressure to offer something new on an ever-shorter life cycle, a wise retailer sticks to its message. We shoppers want to know we're in the right place, where we're seen and understood.

Jean Campbell said…
The last mark-down is an attempt to recoup some of what the retailer actually paid for an item that did not sell, is it not?

A friend told me about stopping by to see if a coat she had been watching had reached final mark-down. Back in the car with her prize, she bragged about her bargain. Her son asked, "Mom, why would you want to buy something that nobody else wanted?"
October 5, 2010 at 8:19 PM

Duchesse said…
Rubi: I like how you put it- a strong story. And realize my story has changed over the years, as well as some retalers changing theirs.

NeilJean: Sometimes, when "no one wanted it", I realized 'they' were right, e.g., a sweater that had faded where it was folded- why did I not see that? Other times, merchant has too much stock, wrong assortment or original price was too high.
October 5, 2010 at 10:32 PM