I have spent days amid boxes of family memorabilia, the aftermath of cleaning out the storage locker. The boxes were taken from my mother's apartment when she died a decade ago; I thought I knew the the contents, but there were surprises.

I found this envelope; the date is my birth. I opened it to find a second enclosure-sized envelope, and inside, a pressed rose: 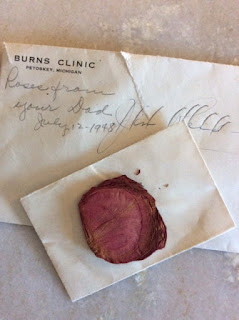 The surprise was not that Dad, a man of courtly gestures, had sent his newborn roses, but that, over seventy years later, the bloom was still red; in that tiny envelope, time had stopped. I took a photo to commemorate its startling scarlet, then discarded the now-exposed fragment, along with yellowed news clippings, hand-drawn birthday cards, locks of baby hair: the things a mother saves.

Each box summoned benevolent ghosts—but for the next generation, the erosion of memory will dismiss them. What might have meaning when my children "go through Mama's things"? I kept Eleanor Roosevelt's invitation to tea at the White House, sepia photos of family homes and formally-dressed ancestors. I bought a pretty new box to hold the archive and trashed the battered, water-stained Hoover cases, themselves antiques. 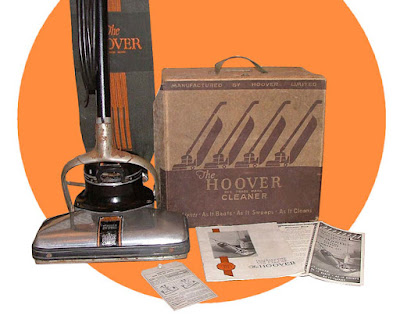 In the bottom of one, I found two collections of silver; the first, part of my grandmother's Joseph Seymour set, ca.1915. (I had fun researching American hallmarks.) Grandma had divided it between her two daughters, and I knew one of Aunt Magdalen's grandsons had her half now. Pete replied immediately to say he'd take mine; I was pleased. The silver goes back to Chicago, its ancestral home.

But I had entirely forgotten about the second set, a dozen place settings and various serving pieces of my mother's trousseau silver, Stieff "Corsage", bought ca. 1935. I had only a faint memory of it; she mostly used her mother's silver, and stainless in the breakfast nook. 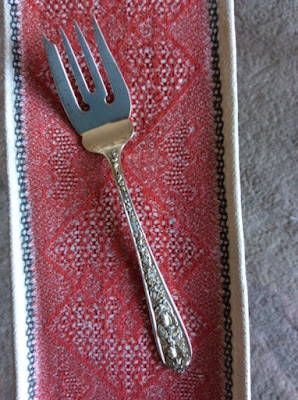 I wonder what drew her to "Corsage"'s floral extravaganza; it is not her usual restrained taste. The glamorous big sister Magdalen, who fly-fished in her old cocktail dresses and never wore a pair of glasses that were not jewelled, may have influenced her.

For preceding generations, the ritual of "choosing your pattern" was even more important than the wedding gown. I remember my sister's nerve-wracked decision in 1960: Reed & Barton Francis 1st, which I (silently) disliked: too heavy and formal.

When I married in 1971, though some girlfriends' mothers still hauled them into china departments, I found silver obsession as square as Lawrence Welk, and wanted care-free Dansk "Odin" stainless steel, which I still have: 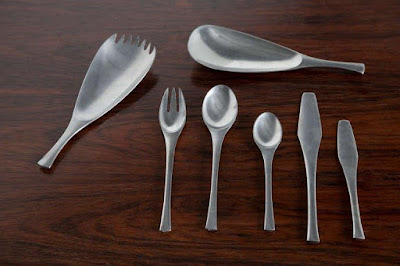 Times change. After I unrolled the Marshall Field flannel pouches and polished the monogrammed pieces, I admired the highly-detailed repoussé and the soft glow of silver that for over eighty years had never seen the inside of a dishwasher.

We are using "Corsage" every day even though it accompanies just dishes, not Mom's china, which I gave to a friend a decade ago because it required hand-washing. I've decided to embrace the juxtaposition. (Either that or buy china.)

Patricia said…
Whoa, hold up Duchesse! Eleanor Roosevelt's invitation to tea at the White House? There has to be a story there! 😊
March 21, 2019 at 8:51 AM

Madame Là-bas said…
Times have changed such a lot. I have a letter from the Eaton family on my grandmother's engagement thanking her for her years of service (she was 23) and presenting her with a tea set. She would no longer be employed since she would be a married woman.
I've got to tackle the family memorabilia when I get home. I feel guilty because my mother is still alive and keeps track of such things.
March 21, 2019 at 9:54 AM

Marla said…
The envelope where your mom wrote roses from your dad brought tears to my eyes for two reasons. One, because he was excited about your arrival (my mom loves to tell the story of my dad running through the hospital hall and pushing people aside saying get out of my way, I want to see my daughter) and she wanted to save the petal for you. Two, because her penmanship is identical to my grandmother's and mother's! I think your mother would be a little older than mine, but it speaks to careful penmanship being taught in those days, and girls carefully practicing. My own handwriting looks like modern art. I have always loved sitting with my mom and sorting through her cedar chest, it is full of lovely momentos like this! Such beautiful evidence of how we were loved!
March 21, 2019 at 11:28 AM

Duchesse said…
Patricia: It was shortly after WWII and Mrs Roosevelt received a group of Army veterans' wives. My parents were in DC for one of Dad's medical meetings and this was somehow coordinated with that. I had either forgotten the story or never heard of it, but she kept the invitation, beautifully engraved on heavy cream paper.

Mme Là-bas: Quite an honour at 23! Does the family still have the tea set? Diving into the memorabilia was fun but frequently baffling as there were so many undated and uncaptioned photos. So while you have your mother, have her tell you who everyone is!

Marla: He was thrilled; this was just after the war, and he had been in the South Pacific for three years, in especially fierce fighting. Her penmanship held that strict cursive line all her life. But, people •wrote• much more then: letters, recipes, checks, notations on bills. I can go for many days without writing, how about you?
March 21, 2019 at 12:48 PM

Marla said…
Duchesse, I am a Civil Engineer and for decades haven't used cursive except for my signature. I do write everyday for my job, but mostly just notes to myself as everything is electronic these days. I studied hand drafting for so many years, neat printing is hardwired!
March 21, 2019 at 12:58 PM

LauraH said…
What a lovely post. That rose, the old photos...brings back memories. I loved looking through the family albums with my Grandmother explaining who the people were and what the occasion was. Sad that kids today don't have those experiences. For some reason, she later removed the photos from the albums and much of the background history was lost. But those old phots had a special magic.

And the flatware! How ornate the patterns used to be. My Mother and Grandmother wanted me to collect a sterling pattern and encouraged me to choose one when I was far too young. It too was very ornate, a young girls fantasy. Fortunately, I later wised up, and chose...Dansk!
March 21, 2019 at 6:44 PM

royleen said…
The saturated color of that rose is amazing. I too chose Dansk, Fjord pattern, the one with the teak handles. I still use it today. A daughter looked up the price on Etsy and other collectible sites, and she almost fainted! Haha. Vintage to them is 1960's.
March 21, 2019 at 8:29 PM

Melissa said…
What a lovely treasure from your father. I noticed that the date was 12th July which is my husband's birthday!
I have been going through similar treasures as I disperse my Mother-in-Law's estate. She has now moved to a nursing home.
In one box I found all of her 21st Birthday cards which I brought over to her on her birthday last month. She was both delighted and saddened as she recalled that all who had sent them were now gone!
As she had much of her mother's memorabilia I had such an enormous task. One wonderful find was a box of hand-typed short stories that her great, great aunt had written and had only been published once in newspapers over the years. They are rather along the line of Roald Dahl's short stories, so when I have time, I will re-type them and publish them, even if only for the State Library's collection and for family descendants.

Duchesse said…
Laura: Did you actually acquire much of the first set? Dansk was a very popular choice for «modern» women, whomwere not iinclined to polish silver.

Royleen: You can drive a tank over vintage Dansk’s European-made pieces. When manufacturing moved to Asia, somewhat less. The rose petal was eerie. (It must have been put in its envelope very shortly after she received them, but with no preservatives.)

Marla: One of our sons received a formal dispensation (in primary school) from having to write in cursive. To this day, nearly 25 yrs later, he only prints, very precisely. So I think of cursive writing as a sort of calligraphy.
March 21, 2019 at 9:11 PM

Duchesse said…
Melissa Hebbard: The cards are bittersweet and it is a touching gesture for you to bring them to her. Like you, I had my mother’s memorabilia. Fortunately transcripts or photos in digital form allow us to preserve things like those stories. I have saved the letters my father wrote to her during the war. Thought of transcribing them, but his handwriting and knowing that he wrote them in terrifying conditions, stopped me. But who knows if anyone else would want them. (They do not supply front line reportage; he did not want her to worry.)
March 21, 2019 at 9:26 PM

sensitive poet said…
The lovely momentos a mother saves would melt your heart: a lock of baby hair, a little inked footprint, a hospital bracelet, a yellowing birth announcement - all these are a silent testament to a mother's love. I love to look at these, and it brings all the memories of my mother's love back to me, with the wonderful heart-warming feelings that goes with them. Even though my mother is long gone, these happy memories stay with me forever.
March 22, 2019 at 11:56 AM

lagatta à montréal said…
Hmm, if he were Canadian, the War Museum in Ottawa would want them. Much more interest in such human interest stories now, as well as hardcore military history. Don't know if there is something similar in the US.
March 22, 2019 at 1:05 PM

Duchesse said…
Lagatta: There are museums and historical societies in the US who collect such material. However, the «  them » I was referring to are family, not institutions. I am not interested in donating these at this time.
March 22, 2019 at 5:15 PM

Duchesse said…
sensitive poet: We are both lucky these things survived. The boxes h ad some water damage which fortunately did not penetrate contents. Also, you need a parent who was a saver.
March 22, 2019 at 5:21 PM

Lynn said…
This reminds me of my last post. My dad was a journalist in the 1950's and 60's so we have photos and stories he wrote about presidents Truman, Eisenhower, Kennedy and Johnson as well as others. He was in the motorcade when Kennedy was shot, and later attended at least one White House dinner with my mother. My father in law was in the Mighty 88th that bombed Germany and we found all of his records after he died. We've saved all this, but who know who will want them....
March 24, 2019 at 9:26 AM