When lost is found

From top hats to typewriters, the near past yields treasures, objects of patina and presence.

"Something old" makes an enchanting gift or accessory, not just for a bride. I'm thinking about what is nearly gone, and how it might be rescued without slipping into weird hoarding.


I was in a housewares shop the other day, and overheard a man say plaintively, "Oh, I was sure you would have them". The clerk replied, "Yes, we used to, but no one bought them." He said, "I've looked everywhere..."

I couldn't resist asking what they were talking about, "Bookends" said the man, "I want to give them as a gift." Where would you suggest he look? 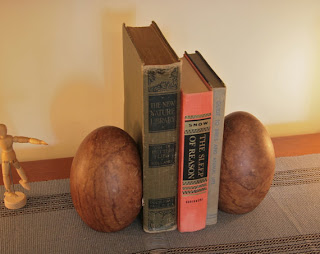 Once literally the jewel in the crown, the hat pin is now a quirky charmer. Daniele wears hers on jackets (like a stickpin) and displays them on a large cushion on a living room side table, like sculpture. A Victorian branch coral and 10k gold hat pin is only $75 from Ruby Lane seller True Treasures of Palm Beach.

Quality fabric is an endangered species.

When Jill Taylor was costuming the '50s-era film "My Week with Marilyn", her team scoured vintage shops, auction houses and markets because, though she made some of the actors' pieces, she said it was difficult to find fabrics that looked as lush as those produced in the '50s.

Sewers stockpile vintage lengths of satin or tweed, but the rest of us search for the exceptions that remain in fabricated items.


The great American textile mills have closed steadily since the 1960s, so even though they seem a going concern, I'd buy Pendleton.

The City Tote shows off a lush piece of jacquard weaving, made of fabric still produced in the US. Price, $88. (Stellar gift for someone averse to carrying leather.)

I'm not suggesting genuine silk stockings unless you or the recipient would swoon. If so, lace-top silks can be worn with or without garters, and come in many sizes (though not always in stock at stockingstore.com) for about $65 per pair.

Whether under a wedding gown or 50th anniversary cocktail dress, silk feels delicious, and not just to your hand.

When we sold our house, one of the things I mourned was leaving tiles custom-made almost twenty years ago by Matthias Ostermann and installed in a wall.

The Montréal-based, world-renowned ceramicist died in 2009, so I had no hope of finding more.

Last week I walked by a Montreal gallery and stopped short, my breath suspended, my arms in goosebumps.

In the window were a half-dozen pristine pieces; the gallery owner was selling part of her personal collection. I bought two decorative tiles; the mermaid is nearly an exact match for one in the wall.

The owner wasn't in; moved to tears, I asked her assistant to convey my thanks. Their appearance felt like a gift from beyond.

What are the materials, objects or artists that you wish to conserve?
Email Post
Labels: art gift ideas

Susan B said…
Ah yes, the fabrics. Even high end fabrics these days often aren't as nice as 'average' stuff from the 30's-50's. It's funny that you mention bookends; we've been out shopping used furniture stores looking for a desk, and have noticed several charming sets that we might have picked up had we room anywhere for them.
June 20, 2012 at 8:59 AM

Dorky Medievalist said…
Chapters (in Canada) sells bookends. I bought a lovely pair of miniature soapstone staircases and a pair of heavy (iron?) owls there.
June 20, 2012 at 9:09 AM

hostess of the humble bungalow said…
That's a happy coincidence stumbling upon the tiles...I can see why you are charmed by the design.

This post reminds me why I love antique malls. They are such a great spot to seek out the beautiful and unusual things that enrich our homes.
June 20, 2012 at 10:28 AM

materfamilias said…
Those tiles are truly marvellous! I love the mermaid -- how wonderful that she has red curly hair, just like her new owner!
As for bookends, I just bought an irresistible set (a bulldog's front and, er, back) in a Home Furnishings/Accessories store a few months ago. From your other commenters, it sounds as if they're out there, if one keeps a vigilant eye out. Hope your overheard shopper finds his . . .
June 20, 2012 at 11:06 AM

Anonymous said…
My parents took me to an auction when I was very small and I was waving my arms around. The auctioneer took my "bid" as a lark, and my father purchased the box on the block at the moment. Inside, among other now-forgotten things, was a pair of hat pins topped with faceted red glass. Beautiful treasure for a small girl!
Also ... I found a red vintage cashmere coat at thrift last week in good condition. Over the Moon!
June 20, 2012 at 11:31 AM

Anonymous said…
Oh Duchesse, I'm so glad you found those tiles! Forgotten things call to me with a mermaid's siren song--it's why I'm happier, always, in a thrift shop or rummage sale than a stylish boutique. Lost beauty, lost quality, lost stories...

At a thrift shop last week I bought an ordinary 1920s secretaire. Taking it apart to sand and paint, I found: a bill from Lord & Taylor for a wool gabardine cape, some packets of Correctype, a photo of a curly-haired boy, a receipt from Mlle. Ursula's Studio of the Dance, and the business card of a psychic specializing in connections with deceased loved ones. Novels have been spun from less promising stuff than that, don't you think?

Of course, children have always understood the riches to be found in attics and junk shops and abandoned sheds, but many adults are squeamish about digging among old things and so end up paying a premium for the treasures others find and polish up for them. (1st Dibs just makes me smile.)

Jill Ann said…
Barnes & Noble carries several styles of bookends, not too expensive. I so agree about the fabrics! Even 20 years ago, here in Houston there were a couple of fine fabric stores where one could buy lovely fabrics. I was a working pregnant woman then, and needed professional business maternity clothes, which were hard to find in stores back then. I had several suits & dresses made, and remember fondly one deep burgundy raw silk suit. So elegant! A woman I didn't know came up to me at the office and complimented me on my stylish maternity wear; most women were still wearing those floral tops with the ties in the back! Yeccch! Sadly, both those stores closed a long time ago.

I feel rather strongly about china that's not made in China. I have a small collection of transferware, and occasionally buy a piece on Ebay or in an antique store...but only after determining that it's proper English-made china. Even a lot of the classic Spode patterns have been outsourced to China now, sad.
June 20, 2012 at 1:55 PM

Duchesse said…
pseu: Nearly everyone still needs bookends at some point, but they do last forever.

Dorky Medievalist: Yes, and did you see the stuffed leather giraffe ones for kids?

LPC: After I wrote this I attended an artist's studio show, and lo, she had several of his pieces too (her own collection.) A much-loved artist.

hostess: I don't know of any here, they tend to be freestanding shops, but that would be a delightful browse.

materfamilias: Those sound wonderful; for you, or a gift?

Anon@ 11:31: What sensitive parents to delight a child so. My aunt received a locked suitcase in payment for a job, once. When opened, there was a Russian silver samovar inside- quite a treasure. I still have it.

C.: So evocative, and I am moved to hear that you are giving the piece new life. Yes, the stores. And also a reminder not to acquire too too much, as plenty ends up in resale shops or auction houses.

Jill Ann: You had an unusual and elegant maternity wardrobe. Know I sound like a fogey, but the current style of tight lycra over the maternal belly looks unseemly to me. Not that I admire those smocks-with-bow tents either, but... is there not a skimming alternative?

Anonymous said…
Oh the memories this and the comments have stirred. My grandmother was a tailor (tailoress?) Who taught me how to construct a garment. At 19 having purchase yards of watered silk shantung i made a simple shift with a short boxy jacket with 3/4 sleeves and covered buttons. The collar could be turned to stand up to frame the face if wanted. I thought I looked terrific as I probably did being young and slim.
June 21, 2012 at 10:03 AM

Duchesse said…
Terri: I was surprised to find them not as fragile as the sheers I usually wear- when I had a pair as a gift.

Anon@10:03: Watered silk is an exquisite fabric- what colour? Would have to hunt to find that today. (Also for a 19 year old with the poise to wear it confidently, now that all are in jeans so often.) What a lovely bequest of skill, and an impressive project.
June 21, 2012 at 10:13 AM

Anonymous said…
Thanks for validating one reason why I sew and collect fabrics for my stash! It's not to save money. It's to have well fitted garments from high quality fabrics without the frustration of shopping endlessly!
Kathleen
June 25, 2012 at 10:33 AM

Jeanne said…
I agree with Jill Ann on Barnes & Noble's bookends. I bought some lovely stone bookends there. I also bought some handmade wood bookennds from overstock.com.
July 17, 2012 at 10:56 AM

Anonymous said…
You have it tough in Quebec? I'm in southern france, where no one is over 5'5, and they wear their clothes too small as it is! Aarghhh. But I swear they must be getting bigger because it's getting a teensy bit easier lately - I'm gaining but it's not harder to find clothes that fit, so maybe those famous french ladies are gaining too?!
August 18, 2012 at 6:55 AM

Duchesse said…
Anonymous: I read awhile ago that the French garment industry is now producing more 44, 46 and even 48 sizes to counter the larger population, so your sense is correct. The 'growth' was attributed to a gradual change in eating habits beginning post-war, producing bigger people each succeeding generation.

I also have a short, round French friend who orders plus-sized basics from the Land's End and Ralph Lauren from US dept. stores; she also likes Marina Rinaldi and Elena Miro, which she can find there.
August 18, 2012 at 8:36 AM