Passing on, coming out

A dear friend I'll call "Linda" just lost her mother. Patricia was 98 when she succumbed to a cold that turned to pneumonia. Pat was our circle's idol: she returned to university to earn an MA in her 60s, drove a baby blue MG in her 70s and stern-paddled a canoe at 97.

Though Pat was married for over 60 years, the real love story was between her and her daughter.
"I wish I could have married you", Pat once told Linda, acknowledging the accord they felt. When Pat turned 93, Linda moved back from Italy, where she has a small house, to care for her at home. She gave five years of unwavering, devoted attention; the last two were hard. Pat slipped into dementia; the wit and spirit Linda had cherished vanished.
I called Linda last weekend to express sorrow for her loss.
I asked if she'd be returning to Italy once Pat's' affairs are settled. "No, she said,"I met someone! Jill was an attendant during my mother's recovery from a broken hip, and now we're together. I'll sell this house and we're getting a place!"
Well, surprise! I knew she'd suffered a devastating affair in her 30s, with a man ultimately unavailable. Since then, I had not asked, she had not told.
And now, here it is: "I thought everything in my life would be over, but I have this", she said, speaking the wonder and gratitude of one who finds love in her sixth decade.
There are a few bumps on the road: her brother "Mike" and his spouse have stopped speaking to her.
Le Duc had some questions: "Recent change or lifelong orientation?" and so on. "None of my business unless she wants to tell me", I said. "What matters is that she's happy."
She is not the first of my women friends and acquaintances to come out after 50. It does put a family though changes; on my must-see list is the recent film  "Beginners", in which Christopher Plummer plays a widower who comes out at 75.
As a contribution to Dan Savage's "It Gets Better", project, someone should make a video about late-life authenticity; I would encourage Mike to watch it, as well as the collection of protest signs here. 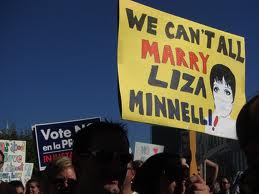 Linda and I stayed on the phone a long time, reminiscing about Pat, planning a visit and agreeing that life holds adventures (regardless of age) more profound than we can ever guess.
Email Post
Labels: life lessons sex and love; relationships

Susan B said…
One of the things that heartens me is that our culture seems to be shifting toward greater acceptance of GLBT people. It's always wonderful to see someone shift into being openly their authentic self. I'm glad your friend has found new love and happiness at this point in her life. It just goes to show we never know what life still has to show us.
July 6, 2011 at 9:05 AM

emma said…
I'm so glad your friend has found someone who makes her so happy. Thanks for sharing this with us, mother and daughter are both remarkable women.
July 6, 2011 at 9:43 AM

Rubiatonta said…
It's a blessing and a lesson for us all when a person finds his or her heart's desire. How can the whole world not wish them well?
July 6, 2011 at 10:34 AM

materfamilias said…
I've had a few friends go through the same thing, one after raising five children. As you say, whether or not a suppressed lifelong orientation or the serendipity of meeting a particular person, it really doesn't matter. Friends thrill to see friends happy.
July 6, 2011 at 10:46 AM

hostess of the humble bungalow said…
How sad...as a devoted daughter myself I shudder to think what pain she must be experiencing.
Good for her that she has discovered love and joy with someone new.
I do not feel that we are in a position to judge or choose partners for our friends or family. Hopefully your friend has made a wise choice and she will be happy.
July 6, 2011 at 10:53 AM

Staircase Witch said…
I am sorry for your friend's grief, but very happy to hear of her newfound joy.

Back in the eighties, an old school friend of my mother married, raised a daughter, got divorced, and then came out when she was forty-eight and has had a female partner ever since. After the initial shock, my mother adapted readily and they still attend reunions together and exchange Christmas letters. That entire generations should have had to suppress who they really were--from the world and even from themselves--saddens and angers me. But it is getting better, thanks in no small part to their courage.
July 6, 2011 at 12:57 PM

Susan Tiner said…
What a wonderful story about your friend. Romance is a wonderful thing, at any age.

Unknown said…
A very heartening story with a happy ending. Love can indeed arrive at any age. I did not meet and marry my current husband till I was 50.
July 7, 2011 at 3:22 AM

Tash said…
Wow. Thank you for this touching story. Shows us just how important it is to remember life is a journey and not a destination...continuously growing and discovering, at every age.
July 7, 2011 at 11:45 AM

Duchesse said…
Chicatanyage: There must be a collection of late/late-ish love stories somewhere. My mother saw love bloom among her friends into the 80s.

Kristine said…
When I was in my 20s, my best friend's parents divorced. A few years later, my friend's mom found someone who just happened to be a woman. My friend's mom told her, "I always knew I'd fall in love again, I just didn't realize that it would be with a woman." For me, that comment says it all. Thanks for posting your lovely story.
July 9, 2011 at 12:02 PM

Duchesse said…
Kristine: I too have heard comments like your friend's mother, from both men and women. Some people's sexuality is more fluid than other's. It still surprises me when someone asserts, at mid-life, that they had *no idea* they could fall in love with a person of the same sex.
July 10, 2011 at 10:34 AM

Anonymous said…
Hi there -- I've never commented on your blog before, but when I saw this post I was reminded of the movie "Normal." It was an HBO or Showtime original movie about a middle-aged small-town family man (Tom Wilkinson) who stuns his family and community by announcing that he wants to have a sex-change operation and become a woman. Jessica Lange plays his wife. Obviously not the same situation at all, but similar theme of "coming out" relatively late in life, if you're interested in other movies in the same vein. It's a fantastic movie.
July 19, 2011 at 6:21 PM