I posted awhile back on getting rid of some long skirts I thought were dated. Not so fast, I learned last weekend.

In the February 20th Styles section, the marvelous New York Times photographer Bill Cunningham featured the long skirts he saw among the crowd at Fashion Week in New York, noting that low- and mid-calf lengths were also on the runway.
You can see them in his short video, "On the Street-Skirting" here; with the added treat of hearing Bill's delightful narration. His creaky voice, sounding quite astonished, is as old-school WASP as a Scotch in a Waterford tumbler.
Bill loves the long skirts, especially those with some transparency; he shot over a hundred examples of long. I won't choose a transparent number, but look forward to wearing my new Asian-print silk chiffon calf-length skirt by Citron Santa Monica that will bloom in spring with a pair of footless tights underneath. 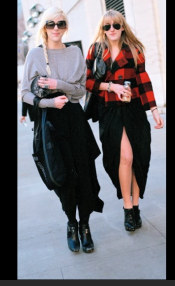 Whether you can wear them this long or not, women are searching for a good length for their bodies, which for most of us is at least a hand's span longer than when we were in our 20s. (As I recall, my arms at my side were about as long as the skirt.)
What long looks like now
If lower calf isn't a silhouette for you, never mind! As Bill says "it's all about diversity".
Here are three longer skirts, but in different moods and degrees of long.

The first is what I call a "long short skirt" by Rick Owens. It's a tie front silk-crepe skirt that drapes gorgeously. Price, $1,005 from Netaporter and no, I am not suggesting you buy it. But look, it's fresh.


Moving lower: this calf-length Marc Jacobs gathered cotton skirt has length but it's not overwhelming for an average-height woman if worn with a heeled sandal. Price, $1,100 from Saks. (I also find this super-pricey, but again, we're window shopping.)

A true maxi: the Elizabeth and James draped wool blend skirt. I'd happily wear it, as a tall woman, and it's not too voluminous. Shown with a flat boot: this is a look I've lived in for years. At $295 (at Netaporter), it feels absolutely cheap after the other examples but of course it's not.


I'm happy that designers are giving women choices other than super short, which looks less than smart on women who wore their first minis in the days when gas was well under a buck a gallon!

How are you liking long?

frugalscholar said…
I said in response to a previous post that I hoped long skinny skirts would return, and it looks like I'm going to get my wish.
February 23, 2011 at 10:18 AM

Fuji said…
I excited about the longer lengths, and am hoping they will be embraced. A couple of years ago the maxi was supposed to return, but it never seemed to take. Your chiffon skirt with footless tights sounds wonderful! I can just the ensemble with nice sandals - looking forward to warmer temps! What color tights will you wear?
February 23, 2011 at 10:34 AM

Northmoon said…
Number three is the only one that looks modern to me. It also has a slim silhouette - a big advantage for those of us who are not as tall and slim as a typical model.
February 23, 2011 at 11:55 AM

Duchesse said…
frugal: What I'm not seeing is the longer fly-front trouser skirt- the sort of thing LL Bean sold in the '90s. The new long seems more romantic; some see a goth reference.

Fuji: Black, as skirt is predominantly that colour- a green, gold and coral print on black chiffon. When summer comes, no tights, just sandals. It is not too sheer.

Northmoon: I in fact have worn all these skirt shapes over the last 40 years, as well as a few they have not yet revived: the long jean, the tiered peasant and the ubiquitous black knit tube of the '90s. Just saw the Rick O skirt in person, beautiful drape. Stood out!
February 23, 2011 at 12:21 PM

Jill Ann said…
Glad to see more choices! As a tallish, but overweight woman, there is no way I was wearing short skirts OR low rise pants. I've been encouraged by higher rise pants lately (less of a tummy bulge for me), and I always loved the look of a longer, full-ish skirt with flat boots. I would also wear, in my warm climate, a thin fabric longer skirt with sandals. We older women have money, people! Give us something to spend it on!
February 23, 2011 at 1:01 PM

Duchesse said…
Jill Ann: Your call to action is one I endorse whole heartily (and with all body parts.) You will often read me ranting about the fact that most designers who showed at Fashion Week stop at a 10, and a narrow-hipped 10 at that.
February 23, 2011 at 1:12 PM

Demi-pointe said…
I like to wear a pencil skirt and flats. But I have to think about the weather and my legs. Too cold (tights but what weight?) too much sun (sunscreen!), not enough color (think ahead: exfoliate and self-tan).
I have recently caught some vintage Golden Girls episodes. There is Bea Arthur (as Dorothy) in her soft suede boots and long skirts. And I think-perfect year-round comfort for those of us who prefer not to wear pants. As the weather changes just switch the boots for flats and then sandals. Maybe Dorothy's look is flowy arty with too much volume to be current but that Elizabeth and James photo captures that less thinking, more comfort stylish look.
February 23, 2011 at 2:04 PM

william said…
I would love to wear a long skirt! I am tall, also, and think they are so much more graceful and flattering. Maybe now is the time to find some long skirts to keep for a long time.

Tiffany said…
I can't do the mid-calf length - for me it's either knee length or full length. I have a black jersey maxi skirt that I thought would drown me (being 163cm) but I actually love.
February 23, 2011 at 4:08 PM

Mardel said…
It is nice to see the option of longer skirts. But none of these are dowdy. The trick is to stay fresh and current. And yes to stylish fresh clothes over a "modern" size 10.
February 23, 2011 at 4:20 PM

Duchesse said…
Demi-pointe: It mystifies me that in a time when most women acknowledge pale is better for you than tan, we are still concerned with what colour the skin on our legs is, and think it must be tan (if one is white) to show in a skirt. In many parts of the world I see women wearing skirts with just normal skin, all shades of skin including very white. I think it's a mental shift and do not like rubbing smelly, expensive and sometimes staining "self tanner" on my legs.

william: One of my tall friends bought her first one and is very happy (but does not wear for work as she says she keeps rolling over it in her chair); good luck looking for yours.

Tiffany: I think more women can wear longer skirts than think they can, and that many (NOT saying you!) would look better with a bit more length.

Mardel: Guess spending a grand saves you from dowdy (LOL). Seriously, you need great shoes, which you certainly have.
February 23, 2011 at 4:44 PM

Fritinancy said…
I want the whole Rick Owens look, top to bottom. I love the proportions, the neutral palette, and the absence of jewelry. (Pardonnez-moi, Duchesse!)
February 23, 2011 at 5:56 PM

Duchesse said…
Fritinancy: I like minimalist jewelry-or no jewelry-with such clothes and would not overload that Ricky O with anything beyond a ring.
February 23, 2011 at 6:57 PM

Rubiatonta said…
Thank goodness the long fly-front skirt hasn't made a comeback! It wasn't that good a look the first time around.

I will also confess to preferring longer skirts in no-tights-please weather, because they provide a longer block of color. It's not the pale skin I object to, it's that my legs are heavy and the proportions seem off without that unbroken line of skirt+tights.
February 23, 2011 at 10:21 PM

Susan B said…
I haven't tried wearing a longer skirt in many years. I'll have to experiment and find out what length works best for my proportions. Having finally been won over by pencil skirts, I'm not yet tired of this look.
February 23, 2011 at 11:54 PM

Tiffany said…
Just chiming in to agree with you re tanning of legs, Duchesse. I'm naturally pale and freckly and I don't give a damn. I don't see the orange skin of self-tanners as any more attractive ...
February 23, 2011 at 11:59 PM

s. said…
These lengths look odd to me now but I realise that soon my eye will adjust. I certainly embrace the wider selection of skirt lengths!

Here's a recent blog entry on the subject of midi-skirts and dresses:

lagatta à montréal said…
As for the pale legs, I'm in Amsterdam right now and while one certainly sees no bare legs this time of year, tall Dutch girls and women with milk-white skin have no hesitation to show the colour of their legs. Nor do women with darker skin; it simply isn't an issue.

Anonymous said…
If you want to try a fanastic tanner, and I have tried them all, check out Clarins self tanning milk. I get it at the larger Shoppers Drug Marts and use my "points" because it's not that cheap. It doesn't smell and is very natural looking, not a hint of orange and yes your legs do look better with some of this on. The French really do know how to make good beauty products. I have had people ask me what I use because it looks so good.
February 25, 2011 at 8:38 AM

Duchesse said…
Anonymous: I'd rather not use self tanners because of the DHA, but I know those not bothered by that love Clarins.
February 25, 2011 at 8:57 AM

lagatta à montréal said…
This note in the Guardian: "Balenciaga has the skirt shape to watch" http://www.guardian.co.uk/lifeandstyle/2011/mar/03/paris-fashion-week-balenciaga-ghesquiere

Too much going on in the shot and the model looked as if she put on her drapes, but it certainly shows a different silhouette.
March 4, 2011 at 6:44 AM

Duchesse said…
lagatta: Fortunately one can buy at lower price points than Balenciaga! But if it is a "trend" maybe women who like longer can find this length more easily.
March 4, 2011 at 8:23 AM