How can I entice you to see this film, available on DVD (from Amazon, $22)? 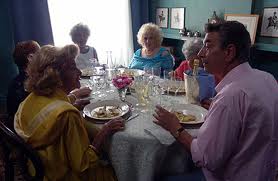 A calmly cowed, bit of a drinker middle-aged son (played by the writer and director, Gianni di Giorgio) lives with his 93 year-old faded-aristocratic mother (Valeria di Franciscis). The money is gone, but her virtuoso ability to manipulate endures.
He is inveighed upon to lodge several other very senior signoras over the long August holiday weekend, and the games begin.
Like a Campari and soda, you will taste the bitter with the sweet. The unsentimental yet tender film is set in the Trastevere neighbourhood of Rome, mostly within the director's own apartment.
"I live in my memories", one woman says, "Old age offers so little." Yet each finds her way around the strictures of 'caregiving' and control. The sense of rebellion is more luscious than cannoli; each woman, in her way, sticks it to The Man, or should I say, I Bambini. 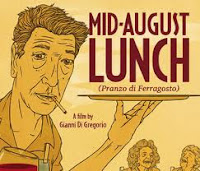 "Don't bother me", the ringleader says when caught AWOL, "I'm smoking, I'm drinking, I feel good here."
There is no dramatic denouement. It's just life on a hot August weekend when everyone who can travel on his or her own steam is out of town. If you recognize the immutable desire to wrest joy from the moment even if it nearly kills you (at least according to your hovering doctor son), you will eat up the kindly but pointed subversion.
Consider it a training film for becoming a feisty, authentic elder–or the child who loves her.
Email Post
Labels: aging culture film

Susan B said…
This sounds like a wonderful film. I'm going to see if Netflix has it. Thanks for the recommendation!
January 20, 2011 at 8:49 AM

Darla said…
I need to see this, I have a feisty Mom about that age. Thanks for the review.

Frugal Scholar said…
So many films I don't know about. Keep recommending--even w/out reviews, since I know they take a lot of time. Grazie.
January 20, 2011 at 11:28 AM

materfamilias said…
on my list, absolutely! Thanks for the recommendation.
January 20, 2011 at 3:01 PM

Duchesse said…
All: "Don't bother me, I feel good here" might be my new mantra.

Rubiatonta said…
Friends in Madrid saw this last summer and highly recommended it. I've had it in my Netflix queue forever -- will be watching it this weekend, when it's predicted to be bone-crackingly cold. It'll be nice to think about August!
January 20, 2011 at 8:17 PM

Anonymous said…
Thank you for the recommendation--sounds like an excellent film.
January 20, 2011 at 9:26 PM

Tiffany said…
That really sounds fantastic. I am deeply tempted to get it for my mother (we will spend Christmas 2011 with her) so we can all watch it together!
January 21, 2011 at 2:46 AM

lagatta à montréal said…
Ah yes, those Italian men (known as "mammoni" (mamma's boys) who live with mamma and her home cooking until she dies. At least this one seems to be caring for mamma in return, in his own way.

Rubiatonta, I'd love to be in August too - mmm, ripe tomatoes - but Ferragosto was a pain when studying in Italy - EVERYTHING was closed, including all food shops, most restaurants and pizzerias, and of course the university cafeterias. One had to plan as if for a blizzard or cold wave in less clement climes. I'm sure you have similar stories of Spain.

Looks like a great film - I'll be googling it in Italian, and seeing whether it is available at La Boîte Noire, our best local source for rental and purchase of films from round the world, and many classics. It may also pop up at an Italian cultural centre.

Duchesse, La Casa d'Italia/Maison d'Italie at the corner of Jean-Talon and Berri (Jean-Talon métro) has been fully renovated, and will play host to a range of cultural events.

Anonymous said…
It sounds great - I just watched the trailer on LoveFilm and have put it on my rental list.
January 22, 2011 at 2:38 PM

Mardel said…
Oh this film sounds very interesting and something we'd both enjoy. I just found it and bopped it to the top of my Netflix queue.
February 1, 2011 at 8:06 AM

The Single Nester said…
My niece actually just recently took my father to see this at our local library. Fun!
February 8, 2011 at 4:13 PM

emma said…
Thanks for this - I really enjoyed the film. May I return the favour? My latest foreign film crush is the actress Licia Maglietta - I've seen her in Agata and the Storm and Bread and Tulips. She's a mature woman who is bien dans sa peau - well dressed, sexy without looking tarty. In both films she plays women who are making changes in their lives.
September 15, 2011 at 9:25 PM

Duchesse said…
emma: Thank you, I am off to the video store that has many foreign films and will look for her films!
September 16, 2011 at 1:13 PM