I enjoyed the requests received while the Passage was shuttered over the summer; here's a roundup of my responses.

A woman who signed as "May Queen" said the jeans she had ordered from a plus-sized retailer had cheap construction, and asked where to find better quality for a woman who wears a US size 20.

The English company Seasalt make durable, classic clothes. May, a Canadian, has to contend with international shipping, but eventually ordered Hallworthy jeans, made in sizes UK 6 to 28. At about $CDN 150 per pair, they hit the high end of her budget but she says they are exactly what she hoped for.

A sun hat that isn't summery

You're right, Jill O. from Oregon, women need sun protection all year. If you live in a temperate climate, that means a brimmed hat that is warm enough for at least mild winter.  The trifecta of sun, cold, and wind makes for a hat-shopping challenge. 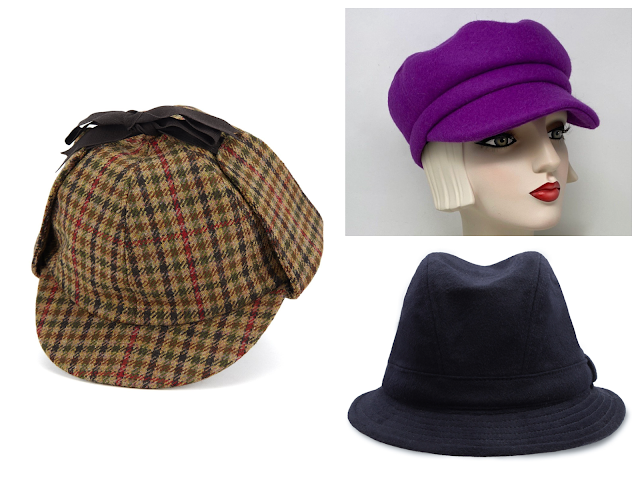 Left: The tweed deerstalker is a fall-to-winter option; this hat, made in many sizes, is from Lock Hatters of London. You can find cheaper models, but I fell for the grosgrain ribbon on the dogs' tooth tweed. Price, £145. Also see the Good Times Deerstalker, an insouciant version redolent of the mystique once wielded by hats.

Top right: With lower UV intensity, often all you need is a good brim at the front. Lilliput Hats' "Enfield" is the perfect peak hat and comes in many fabrics. I especially admire this tart violet. If you don't see what you like, they'll send you swatches for more options; price, $CDN 75.

Bottom right: The Irish Walker at Henri Heni has hidden earflaps that fold down, useful when you're out on a gusty day; price, $CDN 145.

"He asked me to choose and I'm stuck."

Donna's partner wants to celebrate an anniversary with a ring. They have been together forty years and mark the night they became lovers. She was paralyzed by choice, if the twenty-some photos she sent were a clue.

So, I had to get the juicy details. An October weekend canoe trip in Algonquin Park with their university gang. She had her eye on him, so uncharacteristically accepted the invitation to sleep in a tent and eat beans from a can. Starlight, song, glances across the bonfire, and a bit of theatre with them trying to act as if he'd spent the night in his own sleeping bag.

My suggestion, the Dorothée Rosen Maple Wrap ring in 14k gold, set with a sapphire. (Also available in silver.) The ring is made with an impression of a single maple leaf, just like those that blazed colour on that unforgettable weekend. Perfection.

A friend pondered a wedding outfit

Not that my friend B. needs any help whatsover, but it was fun to consider what she might wear to an early-September casual evening wedding in NYC, when temperatures might still be steamy.

For me, it is all about the fabric, which elevates the simplest cuts and honours the joyful occasion. She has a great eye and has sewn for decades, but for those of us who resort to RTW and as an example, I showed her this Itajame hand-dyed silk top from House of Wandering Silk. She has the ideal colouring to wear the lilac and ivory palette. (I also suggested a berry lightweight linen top with a gold zari border, now s/o.)

B. had the bottom layer, a skirt or easy trousers, and an enviable jewellery collection to wear with such a top, including marvellous vintage Mexican silver pieces. However, she eventually decided to forego the gathering, due to concerns about the coronavirus variants, and pressing family obligations.

And someone did ask about pearls

A man who found me through a comment on his partner's blog wanted to buy a pearl pendant (no chain needed) that "is not boring" and said, "I've only seen white ones in (his city)."

The challenge was his budget, $100. I suggested he bump it up a bit but what a pearl, a South Sea baroque in a soft yellow with iridescence. It was $US 119 but worth that to get a plush size, almost 12.9 mm x 13.6mm. The bail is 24k vermeil over silver. From the highly-respected pearl and gemstone dealer Carolyn Ehret of Druzy Design Gallery on eBay.

He dithered. A week later it was gone, but a similar one was listed, and by then another $40 or so was okay with him.

Before the pandemic, I had gently avoided personal shopping requests (though ask me about pearls and you'll get a rapid response!) But over the summer, the scouting felt like solving a small puzzle.

I jumped into each of these discussions with pleasure, because they represent community, comfort, and celebration, all of which we need. Those are criteria for what is in the Passage's windows, though one person's necessity is another's luxury.

Funny how the times have changed my attitude!

LauraH said…
It must be so satisfying to find just the right thing when people ask for your expertise, especially during these trying times. Wonderful to see the results...and to see you using your powers for good:-)
October 5, 2021 at 9:00 AM

Ms. Liz said…
I really enjoyed this post! I have been eyeing the offerings on Seasalt as they have petite sizes. I have not taken the plunge though as the international shipping kind of puts me off. It is really interesting to know what people are looking for and your suggestions. Thanks for this!
October 5, 2021 at 12:59 PM

Leslie M said…
A changed attitude and a blouse from Zara! We hardly recognize you, except for your pearl and ring suggestions. Would peg those as yours from a mile away.
October 5, 2021 at 5:27 PM

Tom said…
It's so interesting to watch you cast your discerning eye over such a range of objects--blue jeans to jewelry! Thanks for the great writing as always. (I need to cast a discerning eye over my over-abundance--I've donated more than 500 books (and have yet to clear out offices) and much other stuff. Still too much.) E not T
October 5, 2021 at 7:37 PM

Hadilly said…
Thank you for all of your recommendations in the past. When I had to choose a birthday present, I asked for a pearl pendant from Kojima Pearls. My mother and step-mother had a lovely afternoon choosing a pendant for me. I treasure it! I’ll try to figure out sending a picture because it is stunning.
October 5, 2021 at 8:29 PM

Unknown said…
Seeing that silk top again, I wish I had bought it! This was a great post, I really enjoyed it. (BTW, that was a small outdoor wedding and the pictures of my friends showed a wide range of fashion. For me, the knockouts were R.,(she/they) in an impeccable man's suit, and N. in a red silk sari. Your choice for me would have been perfect.
October 5, 2021 at 10:33 PM

Denise said…
This probably belongs on a different post but the pearl drop made me think about it. What is your opinion on gold vermeil over solid gold? will it hold up when used as a bail? What about as a pendant?
October 27, 2021 at 10:48 AM

Duchesse said…
Lynn: In the search field on eBay, enter druzydesign, all one word. Or, click on the link I have provided under the photo of the pearl pendant.

Duchesse said…
Denise: Vermeil done everywhere but Canada (and by a reputable maker) will be fine for a pendant bail for years. If worn hard, one day it may need to be re-plated or replaced. (Vermeil in Canada is legally allowed to be thinner so I avoid on pieces made here.)
For just a bail, not expensive.

Gold vermeil on a ring is not durable enough for daily wear.

You also have the option with a company like Druzy Design to request they make a custom setting for the pearl, with a gold bail, which is another reason I recommend the sellers who produce the jewellery they sell. I would buy a gold bail, but he had a budget and wanted to stick to that.
November 8, 2021 at 6:28 AM 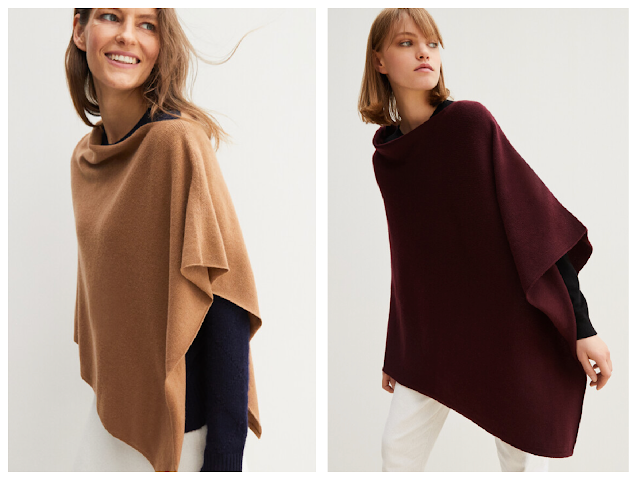 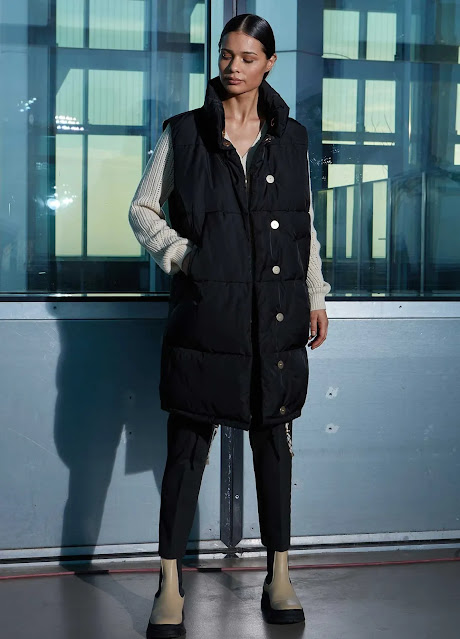 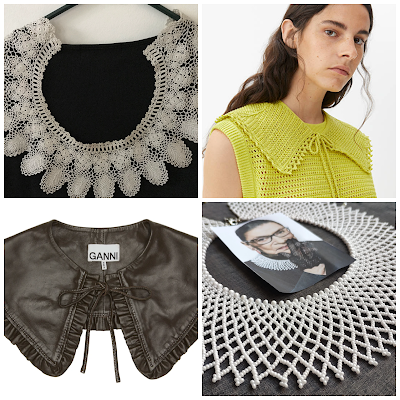