Stories! Any writer gorges on real-life stories, and I've had a banquet lately. Jeanne has allowed me to tell hers.

The moment I saw Jeanne this summer, I knew something was up. She was widowed two years ago. We met at the end of the first year, when she was mourning, and spoke at length about her husband Will, an ebullient, brilliant and deeply generous man. She was subdued, still hollowed-out from a harrowing last year.

By this summer, she was brimming with life. She had divested nearly everything she and Will owned, sold the big suburban house, found a pied-a-terre in Denver. She was a sought-after partner on the competitive bridge circuit, traveling to tournaments.

Jeanne has a son in Montréal, and another who lives with his family on Salt Spring Island in British Columbia, a locale famous for its natural beauty, a sailor's paradise.

While visiting that son, she learned that her first husband, Stewart, whom she'd married at 21 and divorced seven years later, lived there too. At loose ends during the day ("only so much farmers' market I can take"), she decided to look him up, after forty-five years without contact. Stewart was divorced again, and had an adult daughter. At the first coffee meeting, their past bond floated up; they talked for three hours.

After several visits and introductions to one another's children, Jeanne and Stewart dined one evening at the town's one posh restaurant, and afterward, she did not return to her son's home. They resumed what was disrupted nearly a half-century ago.

What happened in the early '70s?  She had a brief affair; they were not at that point able to work through the crisis. "He was always my best friend", she said, "and I felt such guilt that I had hurt him—so I left." They moved apart rapidly, carried by swift currents into others' lives.

When she reconnected, the years seemed to fall away, but now both brought the broader perspectives granted by time, other loves, and the wisdom they lacked in their twenties. After caring for Will for years, Jeanne lives in the present. "Talk to me about Willie any time",  Stewart said, "I want to know him though you."

Her story reminded me of  Stan Rogers' love song to his wife Ariel, "Forty-Five Years", especially the lines,
You say you've been twice a wife and you're through with life
Ah, but honey, what the hell's it for?

Jeanne won't settle permanently in that oceanside town, but will visit soon—Stewart bought a queen-sized bed and is purging stacks of single-guy stuff. She is travelling extensively in the coming year; he will join her at Christmastime. Her children say, "Go for it, Mom."

To my delight, she bought a condo in Montréal for use during the summers; her son will live there the rest of the year. She hopes Stewart will visit; they were newlyweds here, so poor that a night out was a round trip on the métro. I can't wait to meet the man who makes my friend's eyes dance. "Isn't he handsome?" she asked, producing the wedding photo she carries in her wallet: 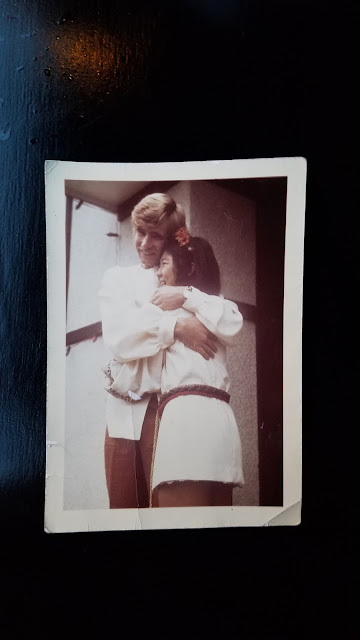 During her month here, they were in constant touch, connected this time like Venn circles, overlapping, but not fully eclipsing the other. Stewart has lived contentedly in his cabin for many years; Jeanne yearns to be out in the world, from Singapore to New York.

But her heart is home again, in an old, familiar port.

SewingLibrarian said…
I believe this story is more common than people know. We bought our first house in California from high school sweethearts who reconnected at their high school reunion after she was divorced and he was widowed. They were both of retirement age. And, less honorably, a former in-law of mine started an affair with her high school boyfriend after she was widowed. I put my foot in my mouth when I asked, "Is he widowed or divorced?" The answer: "He's a teacher." It turned out he was married, and said in-law had to scramble to retrieve letters after he died suddenly.
October 5, 2017 at 9:52 AM

Duchesse said…
SewingLibrarian: In the second case, I would say it depends on the nature of that marriage. I know one couple who separated, but reunited in their sixties not for love but for finances. They share a home and income, but not a life. Another friend who found the letters after her husband's death (which was expected) that revealed a long affair. I still wonder why he kept those, knowing she would find them; he did have time to pitch them.

Leslie Milligan: More stories? Inevitable, what with so many fascinating women in the world!
October 5, 2017 at 11:36 AM

materfamilias said…
What a wonderful story! I wish the couple many happy years . . . .and how great that you'll have your friend nearby in summer.
October 5, 2017 at 12:12 PM

Jane said…
What a nice story. I hope I NEVER see my first husband ever again. Sometimes the past is best kept in the past.
October 5, 2017 at 5:35 PM

lagatta à montréal said…
What a lovely story, with the bonus of her condo in Mtl. Did you suggest companies and locations? (I knew yours was a good one; it has a very good reputation. Not all do, including some very expensive ones). You'll have such fun.

Jane, I was thinking while reading the lovely Tuesday story that I certainly hope never to see my (violent) older brother ever again. I doubt I will; the last time was our mother's funeral. Which had the benefit of stripping me of my nightmares and fears of him. My youngest uncle, who is practically the elder brother, puts up with him out of family feeling, realizing that his violent broodings will never become concrete now.

All so terribly common in families. Dealing with overburdened chosen family now... Taking them a little present - chicken soup!
October 5, 2017 at 6:14 PM

Ms. Liz said…
Lovely story! I am a regular reader but rarely comment. I too believe this story is more common than not. A friend of mine reunited with his high school sweetheart at a high school reunion last year. He is long time divorced. She had never married. Voila! Less than a year later from their meet up at the reunion they have married and seem to be very happy. The couple are in their 60's - just in case you were wondering.
October 5, 2017 at 6:25 PM

Duchesse said…
Jane: I had exactly that thought when she told me!

lagatta: Jeanne knew exactly where she wanted to live- and it's not far from her son, and me.

Elizabeth Carpenter: Thank you for commenting. I think exes who do not wish to reunite outnumber those who do (anyone have stats?), yet some rekindle early loves late in life. She is my second friend to do that. My other friend is now in a relationship with a man who was a high school beau (not a spouse.) They reunited when well into their sixties.

Margie from Toronto said…
How wonderful for both of them! And what I find most interesting is that they are still keeping their own lives while making room for each other as a couple. I think this is so very wise. Good luck to them both.

The Vivenne Files said…
A beautiful story, beautifully told. I think many of us have unfinished stories inside of us...
love,
Janice
October 6, 2017 at 11:21 AM

And oh Stan Rodgers. Saw him several times in concert (in my Chicago days, small stages) and miss that voice.
October 6, 2017 at 2:19 PM

Duchesse said…
Janice: I agree- everyone does.

Jean Shaw: I too saw him many times, and his music still moves me.

Jean Shaw said…
Dagnabbit, woman, I just listened to "The Mary Ellen Carter" for the first time in years. I see what my weekend is going to feature....
October 6, 2017 at 3:25 PM