My brother, and my only remaining member of my birth family, died last week, suddenly and peacefully, at 84.

I can't say quite why the shock was so profound, I suppose because we had chatted just days before, when he was in hospital for a respiratory problem no one thought was serious. 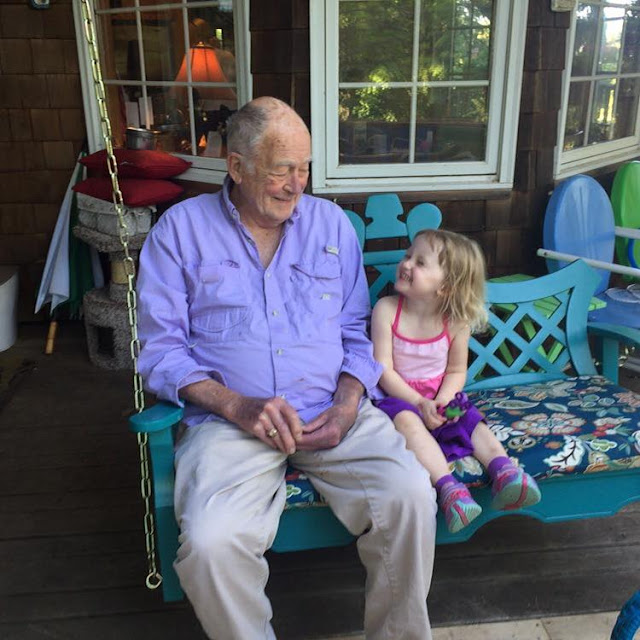 So, may I introduce you to Denny, a little too late. He was an avid outdoorsman— a licensed river guide and expert fly fisher—a natural athlete who'd win a club golf tournament even when it was the only game he'd played that year.

He was beloved by patients, who got house calls and his home number. The father of nine (two marriages), he possessed unruffled calm, no matter what commotion unruly kids or escaped horses brought. Home was a rambling farmhouse outside Springfield, Oregon, filled with children and usually one of their friends who perched at Denny and Jackie's between jobs or studies.

In his student days, he'd hitch-hike between our home in Northern Michigan and Notre Dame, in Northern Indiana, with a duffel bag and a sign that said, "It's Up to You." And oh, the girls were after him!  Because he was fifteen years older, I have little memory of his youth, but my sister said she had to fend off eager "girlfriends" who only wanted an introduction to her tall, dreamy brother.

He was the kind of person who parks where he likes and pays the ticket. He hated how HMOs constrained physicians' practices, and in protest suspended his surgical practice for a time. (He went back, that's what nine kids does to you.) I was about to call him anti-authoritarian, but more accurately, he was his own authority.

And he was a believer of old-school Irish Catholic persuasion. When I spoke to him last week, I told him that while in New York, I'd stop by St. Patrick's and light a candle for him; he liked that. "The candle" was a joke between us, because when he was 15 and my mother was in labour with me, he went to church to light a candle for my safe arrival. When he found out I was a girl, he returned and blew it out.

At St. Pat's I lit two, cutting Mom in on the deal. As I knelt in the vast cathedral, trying to retrieve the words of the liturgy, I remembered what he said to me about his prayers for our mother during her last weeks: "I prayed for her to get better; then I realized I was praying for the wrong thing, so I asked for her to have what she needed now."

I amended my prayer, invoking the same request. I don't know why, because we weren't worried. And the next day, he was gone in a breath.

I will return next week, after family time in Oregon.

Margie from Toronto said…
A perfect eulogy for your brother. So sorry for your loss. Take care.
September 26, 2017 at 7:18 AM

Patricia said…
A lovely tribute to your brother Duchesse, condolences.
September 26, 2017 at 8:33 AM

Unknown said…
I lost one of my twin brothers, he died quite young at 68. There is something very profound about losing a sibling. Somehow it is your generation, even though mine was 13 yrs. older than me. I found it to be a wake-up call that life does not go on forever.
September 26, 2017 at 8:39 AM

Leslie M said…
This was very moving. I hope you find some peace during your visit with family.

On a lighter note, I am glad God honored his first candle and not the do-over. I am sure your brother felt the same.
Leslie
September 26, 2017 at 12:49 PM

materfamilias said…
I'm so sorry, K. He sounds like someone well worth missing, and I hope you're able to find consolation in time with family, sharing memories. xo
September 26, 2017 at 3:59 PM

Mardel said…
I'm so sorry for your loss. What a lovely tribute, and may your time with family be a time of consolation and sharing.
September 26, 2017 at 5:40 PM

LauraH said…
Wouldn't it be wonderful if we could all leave this life so peacefully and quietly and be remembered so lovingly. My sincere condolences.
September 26, 2017 at 6:29 PM

Jeannine said…
What a lovely tribute to your brother. My deepest condolences on your loss.
September 26, 2017 at 7:22 PM

Unknown said…
A beautiful tribute, very touching and that is a lovely photo. Sincere condolences on your loss. Jenni
September 26, 2017 at 9:22 PM

Wendy said…
Your brother sounds like a wonderful man. I'm so sorry for your loss. That feeling of utter shock is unfortunately familiar to me. Soak up all the family time and great memories you can, while you can.
September 26, 2017 at 10:03 PM

twelve said…
A sweet, insightful tribute for your brother. May you have some peace now. Sincere condolences on your loss. At peace.

Adele said…
May his memory be for a blessing.

There's nothing quite like an older brother -- I'm so sorry for your loss. I feel sure that the love and support of family and friends will comfort you.
September 27, 2017 at 7:40 AM

Charlene H said…
I am sorry to read of your family's loss. Thank you for sharing your brother's full, rich, and purposeful life with us. May you find solace and peace while together with your family.
September 27, 2017 at 11:58 AM

Vancouver Barbara said…
You write about him so beautifully. What a wonderful person to have had in your life. A boon. Now that he's taken on a different form perhaps he will be able to bless even more people with his presence. Just reading about him has been a blessing. And his revised prayer for your mother is one I will use today for a very difficult situation. Thank you.
September 27, 2017 at 1:44 PM

Jean Shaw said…
A lovely portrait of a lovely man. And your prayer was answered, I think: He got what he needed and passed in peace.
September 27, 2017 at 2:37 PM

Tiffany said…
What a beautifully written description of your brother. I'm sorry for your loss - but also delighted that you clearly appreciated him when he was here.
September 28, 2017 at 4:09 AM

VC said…
My sincerely condolences on your loss. What a beautiful tribute - your love shines through your word.
September 28, 2017 at 1:05 PM

SewingLibrarian said…
My deepest sympathy to you and to your sons who lost their uncle.
September 28, 2017 at 2:35 PM

Judith said…
I too was moved by this lovely tribute to your brother. I'll remember his prayer for your mother, glad you were able to use it as well. May you find peace in the days to come and enjoy sharing wonderful memories with those who loved him during your time together.