I bought a handful of undrilled Tahitian keshis last winter, from a private seller. For a good while I just admired them in a bowl: 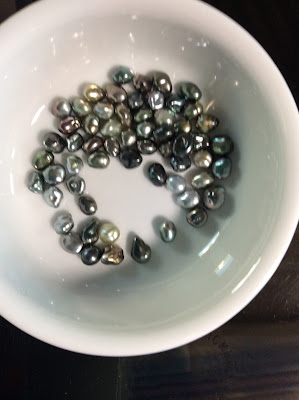 There weren't enough for a strand, though I could have mixed the keshis with other varieties. When my friend B. suggested I use them for a bracelet, I realized that's something I don't have, and that I had various bits and pieces that might work with them.

Who could make this? I thought of a jeweller whose work I've admired and enjoyed for many years and whose designs suit my current life: Vivienne Jones, based in Toronto. Here's a selection of her work, from her web site:

Le Duc gave me one of her bangles on my birthday about twenty-two years ago:


I sent an e-mail. (We had never met when I lived in Toronto.) She answered my inquiry to say that she would be in Montréal in early February for a family visit, and could meet me. (I would have worked via mail or Skype just as confidently. )

At that meeting, she questioned me in her soft Welsh accent while she sketched. She brought shots of other bracelets, and I showed her my bangle, as a reference point: "Like this, but bigger".  She showed me a spiral design whose scale I liked; it had presence but also lightness.

I brought the keshis, some other loose pearls, a few charms, and a pair of gold earrings set with small diamonds, which Le Duc had given me on our 10th wedding anniversary. 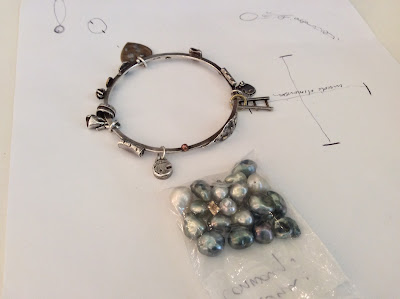 Two hours flew by; she was so generous with her time, but that's important.  If both parties are clear before the jeweller begins to work, she will save design time at the beginning and rework later. She also inquired about a budget and assured me that mine fit this project. 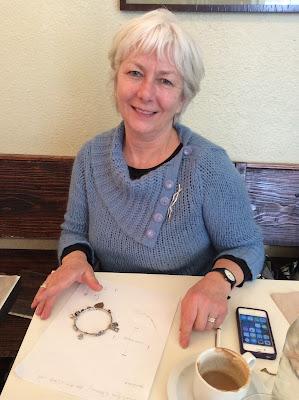 A month later, Vivienne sent many views of the spiral with some of the pearls set, and examples of other elements. This intermediate stage is crucial. The client has to "speak now or hold her peace". Revisions are possible, but may affect cost and delivery time.

It is also the time of the "while we're at it, why don't we just add..." tendency, which anyone who has ever reno'd a kitchen will relate to. (Oops, just spent the entire appliance budget on spalted maple burl.) 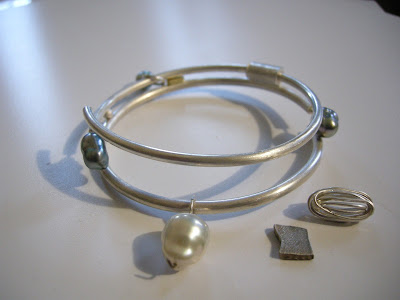 And I almost did that. As I studied the partially-made piece, I thought, "Maybe I should add a few small stones before it's too late". One morning I was online at 6 a.m. looking at 3mm sapphires and other alluring gems, until I got a grip. One of the reasons I am so taken with her work is Vivienne's restraint. There was a very good chance that, in my enthusiasm, I would over-egg the omelette.

I simply told her it looked perfect, and to continue.

Another six weeks, and it was ready! The bracelet has abundant details, in both fixed and stationary components. I can even wear my old and new bracelets together. 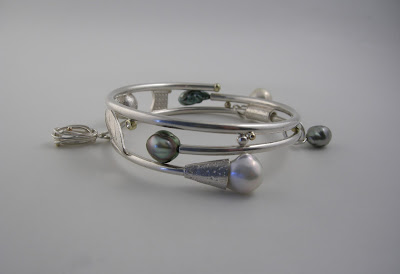 Custom design means you can repurpose materials that are sentimental and mix in some new to create a piece that delights every day. The cost was comparable to that of a major brand's silver cable bracelet, but worlds above in terms of workmanship.

Vivienne Jones' work is available in Montréal at Galerie Noel Guyomarc'h, and in Ottawa at L.A. Pai Gallery. See this list for other galleries. You may also contact her directly via her web site.
Email Post
Labels: bracelets restyling jewelry value

hostess of the humble bungalow said…
Its a lovely combination of pearls and silver...and how wonderful that you met up with the designer who created it with you in mind.

Leslie M said…
The end result is beautiful and unique. Your description of the process is so helpful for those of us who may embark on the same path. So, what will you be doing with the remaining pearls? Any ideas?
June 1, 2017 at 1:28 PM

SewingLibrarian said…
Your bracelet is unusual and lovely - and restrained. I hope you wear it often. As I have said in the past, I love bracelets because I can look at them while wearing them. But they have to be comfortable to wear. I'm sure that this one, made especially for your wrist, is easy to wear. Like Leslie, I'm wondering what you will do with the "leftovers."
June 1, 2017 at 10:09 PM

LauraH said…
Love the step-by-step of this post. I agree with SewingLibrarion - it's wonderful to admire your wrist wear as you go through your day but comfort is essential. I have a couple of cuffs that don't work all that well so I choose differently now. No such difficulties with your beautiful bracelet!
June 1, 2017 at 10:50 PM

The Vivenne Files said…
That's stunning - and it really feels like it reflects your taste well. We've of course never met (yet!) but it has a sensibility about it that's unique, restrained, but expressive. Well done!
June 2, 2017 at 9:30 AM

Susan B said…
What a gorgeous design and use of the pearls! And I agree, the restraint adds so much to this piece, and makes it more timeless.
June 3, 2017 at 1:02 PM

I am likely to mix these in with some other pearl varieties as part of a rope, but for the moment my budget is drained!
June 5, 2017 at 8:51 AM