Skip to main content
Labels
Posted by Duchesse May 02, 2017

There's this evening that I love in Montréal, which happens sometime during first weeks of fine weather, as if everyone in the city says, It's here; we're going out!

You never know when it will strike, so you can't call a friend and say, "Let's go out Wednesday." This year, the evening was last Thursday, which coincided, to my delight, with the vernissage for Janis' Kerman's 45-year retrospective show of her jewellery, at The Guild of Canadian Crafts. 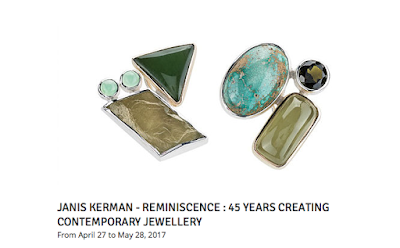 My friend and co-grandmother Natasha and I met there; Natasha was a high school classmate of Janis'.

The mood had built during the day, the fizzy sunshine and warmth (26C) caused the young women to cast off not only coats but a good deal of everything else; this year, I can tell you, will be about satin shorts.

Janis' show was a wonderland; come to Montréal between now and May 28, to see for yourself! (Several readers are planning to do just that, and I'm delighted.) This was Natasha's first encounter with Janis' signature "balance, not symmety" approach; she was captivated, and immediately thought of her unworn pieces, presently in a bank box.


We had as much fun admiring the jewellery many women wore, as viewing the exhibit. I stalked a brunette in white baroque pearls with a long, cylindrical clasp Janis had pavéd in fuchsia sapphires.

Natasha wore a Janis Kerman/Nicole Lachapelle belt, with a large brass buckle that dated from the '80s; Janis' mother wore a similar one. "Mrs. Kerman", Natasha told her, "you were the most elegant of all the mothers."

That in itself would have been a star outing, but The Evening must not end at barely 7 p.m.! We ducked around the corner for soup dumplings, snagged a window table to see the passing show. Couples kissed in the street, a smiling dog waiting outside Café Myriade accepted scratches. As the sun set, the warmth barely left, the collective mood built. We could feel the city hum.

One does not deny this sensual pleasure after our winters. A glass of wine, perhaps? We walked over to Alexandre, a champagne bar with its front wide open, and sat side by side on a banquette from where we could absorb the scene: serious décollete on many women (and not just youths), men in sleek suits. 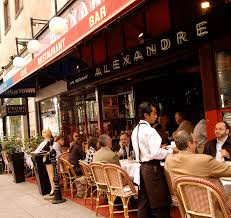 Coming home some time later, I walked by another bar. A handsome young man stood on the sidewalk chatting with his chums. I heard him say, "...fait que j'ai conduit à Montréal!" ("...so, I drove to Montréal!") The sense was clear: He saw that this would be The Evening, and had to be here.

Le Duc had gone out for an espresso earlier, but by the time I arrived was contentedly reading David Foster Wallace's "Consider the Lobster". He admitted he had noticed the girls and agreed that it had been The Evening.

For the next five months, that particular electricity will strike again at unsummonable moments. Everyone will sense it; they'll throw together a picnic in the park, where surely someone will play a guitar, or hang out on the balcony, have a beer. 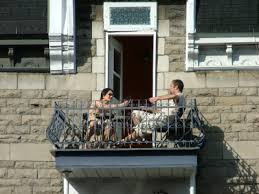 Parents will let kids stay up later even on a school night, take them for ice cream. Young bucks will begin their weekend, no matter that there's work tomorrow.

As if we need further enticement, this year the city celebrates both the 50th anniversary of Expo '67, which brought the world to Montréal and vice versa, and the 375th anniversary of the city's founding. It's an especially auspicious time to visit, and stay out late when you do.

To learn more about the many events planned for these celebrations, go to Montréal375 and Tourism Montréal.

Madame Là-bas said…
Oh, my goodness! When I was in high school 48 years ago, I was chosen for an exchange to Québec. We visited Terre des Hommes and were entertained at a lunch by Mayor Drapeau. It was the sixties and Bilingualism and Biculturalism were the important words. How I loved Montréal which seemed so cosmopolitan to a girl from a rural suburb of Vancouver. I often forget about Montréal when I plan trips but I very much enjoy being transported by your blog.
May 2, 2017 at 7:39 AM

Margie from Toronto said…
What a wonderful evening! My Junior High organized a trip to Expo and I was ducky enough to go - it was amazing. A couple of years ago I was in town for a few days and my friend and I rode the Metro out to the grounds and saw the "Dome" and the sounds of La Ronde are still the same - although I have to admit I had not realized that the old fort was there - guess I was too dazzled by all the new & ultra modern sights at Expo 67. I was finally able to tour the fort on that trip. I hope to visit again over the next few months - I love to wander in the "Old Town" and on the grounds of McGill - a beautiful city. Happy birthday.
May 2, 2017 at 7:46 AM

lagatta à montréal said…
I see that the Canadian Guild of Crafts (which has long has a notable axis on Indigenous Arts and Crafts) is now simply "The Guild". I love those earrings and will try to make it there, perhaps tomorrow as there will be a ceremony nearby for a totem pole temporarily in Montréal for the 375th and to commemorate survivors of Indigenous residential schools. Don't know if I'll have time...

Shameless plug for Présence autochtone/First Peoples' Festival: http://www.tourisme-montreal.org/blog/the-montreal-first-peoples-festival/ (I work with them). Note that the write-up refers to a previous festival - the current one hasn't been produced yet, let alone translated into English.

Yes, it is a remarkable time of year. While I certainly don't hate the rain that is turning everything brilliant green, I do hope for some sun and heat again soon. It is lovely to see people emerging and celebrating. But silk hot pants weren't a good look back when, and they aren't a good look now. Tacky - quétaine. My younger friends would heartily agree.
May 2, 2017 at 7:49 AM

Margie: I believe you are returning soon, we have had so much rain- I hope it's better for walking around when you're here.

lagatta: I suppose they sound tacky but on lissome young women, black or champagne-coloured satin shorts were alluring. I know quétaine when I see it-and with the wrong accessories satin shorts could be that-but the half-dozen pairs I saw were styled differently, with espadrilles or other flats, a simple tee and an armful of bangles. But of course they are not going to be suitable for biking ;)
May 2, 2017 at 8:13 AM

lagatta à montréal said…
Wearers will definitely cycle in them, just not very far as they are a bit fragile. As you know, silk can actually be a very strong fibre.

In the Netherlands, the first warm, sunny day is called "Rokjesdag" - (little, short or lightweight) skirts day, when women and girls first wear such skirts without leggings or heavy tights. And certainly on cycles!

I was thinking of lissome young women, but 40 years ago. I guess the disco accessories and overly-shiny satin (often not real silk) produced the tackiness. And this also reflected the gulf between boho types and the disco set...
May 2, 2017 at 8:43 AM

LauraH said…
Love your evocations of Montreal and this is one of the best, you really capture the feeling, seems like I'm there.
May 2, 2017 at 9:19 AM

materfamilias said…
Wonderful post! Wish I were going to be there again this summer -- last year's visit was far too short.
May 3, 2017 at 12:09 AM

The Vivenne Files said…
Sigh... Okay, we give in! Someone else was singing the praises of Montreal to us on Sunday, and I believe we've committed to coming up sometime in June.

The way you describe it, I might come up this afternoon...

Duchesse said…
Janice: Love to meet if you have time, or to offer any suggestions.

materfamilias: May you return before long! I will never see a bike without knitted accessories without thinking of you.

SewingLibrarian said…
This post brings back memories of my parents and younger brother attending Expo 67 while my older brother and I stayed home to work summer jobs. Their hotel reservations were messed up, and they ended up staying with a lovely Canadian family. I seem to remember they returned in 1968. Did the Expo run for 2 years? My parents' favorite Canadian city was Toronto, but they enjoyed Montreal, too.
May 3, 2017 at 9:53 AM

Duchesse said…
SewingLibrarian: I am going to tease you: cannot a •librarian• not look up the dates of Expo '67? (October to April '67.) Many local families billeted visitors, I am glad they had a good experience.
May 3, 2017 at 1:04 PM

Duchesse said…
Sewing Librarian: But the last laugh is on me for getting the start and finished reversed, it began the last week of April '67 and ran to October of that year.
May 3, 2017 at 1:05 PM

SewingLibrarian said…
Ha! Yes, I was being lazy. :) I have the distinct impression that my parents and brother stayed twice at the home of the Canadian family, but perhaps they just returned to visit Montreal itself. I'll have to ask my brother if he remembers.
May 3, 2017 at 3:40 PM