Friends: Silver, gold and the second time around

Remember the campfire round,
"Make new friends, but keep the old
one is silver and the other gold"?

I've been in touch over the past months with my best friend from junior high through his school, Susan. (This makes about five close Susanfriends, was there name drought in 1948?)

Neither of us remembers the reason why we lost touch after high school, probably simple geography. I left for university and never really returned; she married at nineteen and moved to Florida. There was no e-mail then, and students didn't make long-distance phone calls to chat.

Though Susan did not attend our 50th class reunion last summer, we became friends on Facebook and then exchanged detailed letters explaining the last half-century.

We are discussing not only sentimental highlights, but events that we didn't understand, or attend to in those years. We see in one another more than traces of our younger personalities.

She defined vivacity: a cheerleader whose red skirt flew out as she spun, who always knew she wanted to be a nurse, though she had a professional-level voice. I was a serious student impatient for a broader world, and saw top grades as an exit strategy.

Her parents were more permissive than mine: she could have a steady boyfriend, her curfew was later, and in our senior year, every once in awhile her mother served us a weak highball. I was envious of her engagement; my mother was not, pointing out that motherhood at nineteen would close certain doors.

But before our lives diverged, neither of us bought a swimsuit, accepted a babysitting gig, or signed up for a student club without consulting the other. We debriefed tests together and plotted to overthrow Ed and Wilbur, two geniuses gunning for top honours. Susan and I seemed to need each other so much then.

One of the factors in our renewed friendship is that we remember one another's parents, though my memory of her father is mainly of a man who came to dinner resigned to bearing the giggles and inanities of two pre-teens over his pot roast. In our teen years, we were allowed trays in the living room, merciful relief for everyone.

I knew the boy she married, an athletic, easy-going fellow we called "cute". They had three children, then divorced after  a dozen years together. Once they were school age, Susan went back to school and became a nurse, fulfilling her dream.

She married him again last week, after a thirty-some year break and other intervening marriages for both. The relationship revived about three years ago, after Steve was widowed. During the ceremony, he said, "I loved you from the first moment I saw you, I always have, and I always will."

A daughter-in-law officiated; her husband texted his siblings, "Today, Becky marries Mom and Dad at my house!" 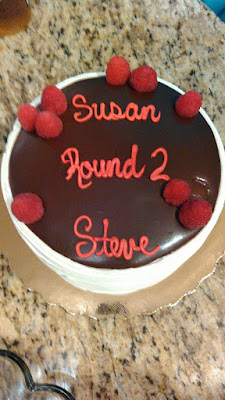 If love is lovelier the second time around, so is our friendship. Sometimes we'd argue until one of us stomped out, repossessed Nancy Drew books in hand; our mothers would phone one another to try to figure out why we were irate one day, inseparable the next. (I refused to attend summer camp because Susan wasn't going.) Now, I think we took out the storms of adolescence on one another.

Coincidentally, one of my friends here told me of calling her best friend in high school, after decades of silence, and talking for two hours. The US election seemed to kick up the desire to affirm old ties of community and contribution.

Have you reconnected with a friend from far in your past? How did it go? Or perhaps you are thinking of doing so now.

hostess of the humble bungalow said…
I quite like this story of friendship...
and its amazing that Susan and Steve have remarried after intervening relationships and other spouses.
It is curious and I wonder why they ever split up in the first place if there was so much love between them both?

Leslie M said…
Coincidence? This morning I was thinking of my childhood best friend and wondering if reconnection was possible. Kathy and I were best friends from 7th grade. We graduated with the exact same GPA, she beat me out of a higher spot in our class ranking only by the fact that her last name alphabetically preceded mine. After high school I moved to California. She moved to Austin, but we kept up a correspondence throughout our twenties and frequently traveled back and forth to see each other and share in each other's homes and life. In our thirties, I moved back to Austin to be close to an ailing grandmother just as she prepared to go to NY with her partner and child. She finished her Masters, I moved up the professional ranks. It was here that we started to lose interest in the high interaction of our friendship due to commitments to family, school, work, other relationships. It never really recovered. Like you, I recently found her on Facebook, though neither of us are frequent users of the site. I found out that she had lived in Seattle for a time, my current home, without contacting me. She mentioned that she has just relocated to Colorado to be with a grandchild, about whom I'd love to hear, but alas, she has not responded to my most recent inquiry. It saddens me that we cannot rekindle a friendship that was once so necessary, so close, so integral to my youth. Perhaps one day she will contact me, perhaps not. But, I heard a song this morning on the radio that reminded me of her and then opened your blog. Thank you.
December 8, 2016 at 3:37 PM

royleen said…
Long-time friendships are so precious. My BFF and I met in 1961 when we were in 10th grade. We were very close until she moved to the east coast from California. At that time, long-distance calls were a luxury, but we managed through occasional calls and letters. She experienced a psychotic break in 1979, and I remember crying on the phone because I could not fly to PA and be with her and her husband. Undiagnosed as bipolar until this time in her life, the psychotic break was caused by the wrong meds. Fortunately she got great care and went on to a distinguished career as a teacher. As cell phones and email came into our lives, we were able to once again "talk" everyday. As we did in high school and most of college. We have visited back and forth more often as we had more time and more resources . I remember when she got her drivers license and I was so jealous that she turned 16 a whole year before me! Now I will turn 70 in 2 months, and she will turn 71. She will always be my best friend. We have been through so much together, and hope to make more memories in the future. 56 years of memories so far. Bonus: our husbands like each other!
December 8, 2016 at 6:01 PM

Mary said…
I am happy that you have had such a lovely reunion with your old school friend. I cannot say the same for myself as I have not stayed in touch with any old school friends. About 10 years ago I did meet up with a few of them, but over dinner at a restaurant, it was clear we no longer had much in common. Their conservative leanings and monetary philosophy were a far cry from my liberal leanings and non-profit worklife, so it wasn't easy to find common ground. None of us made any effort to do so after that dinner. C'est la vie.
December 8, 2016 at 6:08 PM

Susan said…
I've reconnected with some old friends through Facebook and it has been great fun. Your story of reconnection is a fun one and I am fascinated by Susan and Steve's remarriage.
December 10, 2016 at 2:32 AM

Duchesse said…
Mary:I had a similar experience meeting an old university roommate last summer. Lunch was pleasant but I don't think we had much common ground.

Royleen: E-mail has been what's made the difference to us being reconnected; we have not yet Skyped. Lovely story about your friend.

Leslie Milligan: Sometimes a person has intentions but intervening events make her less available than we'd wish. I hope she turns up.

hostess: She wanted the divorce, and takes full responsibility for that poor decision. She was exhausted by three children close in age, plus full time work, then her father suddenly died and she just fell apart. Divorce seemed like a solution but in this case was not.

Lagatta: Yes. Susan had always wanted to be a nurse, began her training after high school, but dropped out of program to be with her three children. She finished her degree after the youngest was school age.

Bunny said…
I've recently connected with someone from my high school, which was quite a small school. We were not close friends in HS.She was a jock, great athlete, and I was an artsy brainy type. But we were all part of a graduation class of about 65 young women. Reconnecting came through FB and it has been a delight to find out we share the same political views and that strong Catholic upbringing. She has a very dear friend who has the same illness I have in my face and wrote a post on how difficult it was to see her friend suffer. I mentioned I knew what it was like as I had the same. That led to private messages and much convo. I agreed to speak with her friend and offer support. I am so glad this happened and something good came out of my suffering. You just never know who you can effect people and how your experiences can bring them comfort, joy, understanding and so much more. It's been a really nice experience. I love how today we can reconnect with old friends from years back. It's all really quite amazing.
December 10, 2016 at 7:43 PM

Carol in Denver said…
Our Girl Scout troop from high school had a reunion for our 70th birthdays. It was so COMFORTABLE being with each other again! We spent a few days in Albuquerque, some of us climbing high ladders to explore the caves of ancient peoples, others of us shopping, visiting museums, etc. Lots of talking and catching up, so much fun. After years of scant communication, we now mostly keep in touch via email and a few letters at Christmas.
December 11, 2016 at 1:26 PM

Beth said…
Great story, well told. And it felt like a bright spot amid so much not-happy news of late. Here's to love, whenever and wherever, never mind the gaps in between!
December 11, 2016 at 10:47 PM

Mardel said…
Great story. I reconnected with an old friend from high school some time ago, but have not been good in keeping in touch the last few years. Time for that to change. But I do think the process of aging helps us in connecting and reconnecting
December 12, 2016 at 7:08 AM