A brush with His Purple Highness

On Boxing Day, ca. 2002, in the early evening, I was walking though Toronto's Bay St. subway station. The hordes of bargain-shoppers had dispersed, the station was eerily deserted. Coming toward me, down a tiled corridor, was one boy. As we drew closer, I realized the boy was actually a diminuitive adult, and, seconds later, that it was Prince. (At that time, he had a Canadian wife, and a house in Toronto.)

I'm a lifelong Prince fan; one of my sons remembers receiving the Emancipation triple album from me when he was 9, parental advisory sticker be damned. He wore a conservative, elegant ensemble: impeccably tailored tweed jacket, soft brown trousers, cognac boots with a high Cuban heel. No tie, not a hint of purple rock n' roll. But, indubitably and sinuously Prince.

He gave me the look Le Duc and I have occasionally received from other celebrities: I Know You've Seen, and I Thank You for Not Bothering Me. So I passed without acknowledgement, but inside, I was shrieking, foaming crazy with delight, lightly in shock, wanting the forty-second encounter to never end.  When he had just passed me, a woman appeared, and I clutched her elbow, saying, "PRINCE! Look, there's Prince!" She said, "Prince who?"

I never saw him perform live; either the tickets sold out before I could snag one (as for Montréal's flash concert last winter) or the price was prohibitive. But, a Prince show was top of my Dream List and I figured next time, spare no expense. 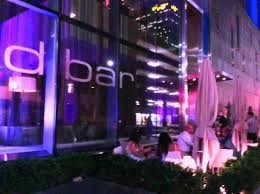 I met my longtime friend Christine in Toronto last week, coincidentally at the very spot where I'd seen him; she too adored Prince. dBar, where moody mauve lighting felt especially apt, featured a Purple Rain cocktail, but we stuck with our favourites, a martini and a rusty nail, and spent an hour recalling our favourite songs and his irreplaceable persona. Christine had just returned from Italy, and had tucked a gift for me into her bag: a chic ring of leather with Florentine gold accents. 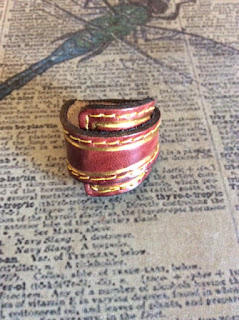 Her present will always remind me of Prince, of his dance-till-you-drop music, and the evening we spent celebrating his gifts to us, with sadness and affection.

Hummingbird5 said…
I am so sad at this loss. How wonderful that you had a moment to lock eyes with him--and oh, those eyes. Thanks for sharing it, and thanks also for remembering what he wore! <3
April 28, 2016 at 4:12 PM

helen tilston said…
A wonderful encounter and tribute to Prince. Like you, I have always loved him and his music. He was up their among the best: Elvis, Sinatra, Pavarotti, Michael Jackson, David Bowie and Prince. Who is left? Who is similar to the latter three? Bruno Ma ??
Helen
April 28, 2016 at 6:11 PM

helen tilston said…
oops.....correction .."there among the best"

Duchesse said…
Helen Tilston: Good question.
When Dylan goes, it will be huge.
Leonard Cohen. Joni.
Tom Petty. Clapton. Springsteen.
For me, Stevie Winwood, another great multi-instrumentalist.
For some, McCartney, Sting, Madonna.
I'm sure I've missed some.
April 28, 2016 at 7:17 PM

lagatta à montréal said…
I sent a message to one of my dearest friends who was an early Gay liberation activist, not so much about Prince or David Bowie, themselves, but what they meant to young people who were either rejected because of their sexual orientation or confused about it. My friend was kicked out of the house in rural Québec at 16 because his dad suspected he was a maudite tapette. Now the lives back in the Townships, quite happily, as does Clémence Desrochers, who sang a memorable song, "Les deux vieilles", about the lifelong love of two women.

Unknown said…
Thank you for sharing your story. I have seen that glance of appreciation you mention...in that moment you shared a thought with him. I had not really listened to Prince in many years but I cannot now get his songs out of my head. His untimely passing reminds us all of the brevity of life.
April 28, 2016 at 10:40 PM

materfamilias said…
Great post, Duchesse. You are such an evocative and entertaining and elegant writer. I like to think that The look Prince sent your way in some tiny way acknowledged something beyond appreciation for your restraint at recognition. I suspect he discerned, if fleetingly, some kindredness in elements of your sensibilities.
April 29, 2016 at 12:28 PM

Barbara said…
Beautifully written story.
I saw him on this "Sign of the Times" tour, on which Prince as the first artist worked with digital tools aka PC to create several breathtaking stage designs. Sheila E. played the only drum solo I ever liked. And Prince was simply genius.
So, Duchesse this is for you as you mentioned several artists you love:https://youtu.be/6SFNW5F8K9Y
May 1, 2016 at 11:02 AM

Duchesse said…
Barbara: A perfect choice, this has been n my Watch list for several years; I love how young Dhanni Harrison is beyond thrilled, how Petty gives Prince the stage, and of course that solo, from the first note through the guitar flying.