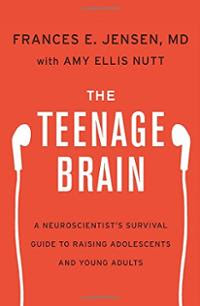 Anyone who has reared, taught, dated or even sat beside a teen on a bus ought to read the full article, but here's a summary: like the rich, teens are different from you and me.

They have more fun.

Citing "The Teenage Brain: A Neuroscientist's Survival Guide to Raising Adolescents and Young Adults", by Frances Jensen with Amy Ellis Nutt, and "Age of Opportunity: Lessons from the New Science of Adolescence" by Laurence Steinberg, Colbert limns the neural differences behind what you always knew: teens and young adults feel invulnerable, hence their fun is, as my own then-teens said, funner.

What crazy shit did you do?

Several newly-minted drivers and their friends would drive way out onto the frozen ice of Lake Michigan on a subzero evening and tie toboggans onto the rear bumpers of the family cars. We'd pile on those toboggans, and the drivers would go real fast. (For those unfamiliar with the Great Lakes, they freeze in jagged moon craters of snow-covered ice, not glassy, like a skating rink.) No one died.

Not everything we did for fun was dangerous to us. My classmate Dick was fooling around with a hunting rifle, in his room. Unlike the tragic incidents in which a careless kid hurts someone, Dick merely discharged the rifle into the wall—but that wall was the boundary of his parents' clothes closet, so Dick shot through every one of his mother's dresses, blouses and coats, murdering her entire wardrobe.

Oh, there is more, much more. But the point is, if you could lure me out onto a frozen lake today and offer that wild, moonlit ride, I would say, Are you crazy?, and also wonder, Where is the nearest bathroom? What if I lose my glasses? Don't I have a geometry quiz tomorrow?

That's because, according to the neurologists, the executive function of my prefrontal lobe is now firmly and fully on duty. When the brain matures (around age twenty-nine), fun grows up too.

We know a couple who moved to a retirement community in Florida called The Villages; it's an Epcot of the Elderly: a zillion golf courses, all kinds of themed restaurants, plenty of edifying classes and lectures, travel provided by motorized cart, vodka-and-sodas cheaper than Coke, and ample casual sex, if one desires.

Mary and Mike admit that problems of excess can arise, but say most residents balance sybaritic pursuits with responsibility. But I cannot even think of signing on for packaged, deliberate fun; amusement parks have never delivered for me.

I'm culturally Canadian now; we don't grab our gusto, we sip. I tried to complete the sentence, "My idea of fun is...". The results were embarrassingly mild: a friend and I have real hot chocolate at Juliette et Chocolat after yoga. What, I wondered, happened to the exhilaration I felt at sixteen, when the folks' car pulled out of the driveway and Susie came over for a marathon of fudge-making, soul-baring and belting "Downtown" while we nipped at the mickey of Jack she stole from her brother's gym bag?

I realized that, just like a trip, a key component of fun is its anticipation; that hour before Mom and Dad left was exquisite as a pitcher's windup.

Another memory rises from the two years when I lived, from nineteen to twenty, in a sorority house at a Big Ten American university.


It is Saturday, early evening, and everyone's getting ready. Dates announce their arrival on the house phone; study buddies debate where to get the best pizza after the library closes; Mary Kay waits for her boyfriend and his cousin to drive from Detroit to go dancing. ("Anybody want to come along? Stu's kind of cute.") "Suzy Q" blasts from the stereo, a nimbus of steam, hairspray and fragrance floats from the communal bathroom; Jeanne walks by in a killer outfit: her roommate's miniskirt and my sweater.

I have never again experienced that fizzy anticipation, supercharged by a liberal shot of autonomy, a restrained Midwestern glamour (false eyelashes, falls), and the rich certainty that the evening ahead would deliver fun. We knew it and unreservedly leapt in— and so it was, indeed, funner than nearly anything I have experienced since.

What's fun for you, these days? Does it differ from 'then'? Are you still open to risk and excitement, or is playing with your cat or grandkids amply satisfying?

Susan said…
I think the wildest thing we do for fun is take moonlight rides in a John Deere Gator through our pastures---oohing and aahing about the beauty of it all. This is a great post Duchesse. I'm forwarding it on to our daughter in law who is a neuroscientist researching impulsivity and addiction.
January 26, 2016 at 7:50 AM

Susan B said…
I love travel and the anticipation, and now that's my fun. But "most fun ever" would have the be the Morris (Dance) "Ales" (gatherings of Morris dancers) I attended in my early 30's. Singing silly and obscene songs on chartered busses, skits after dinner, lots and lots of beer and dancing all night (which helped mitigate the beer). Those and working Renaissance Faires have to be at the top of my list. I was a fearful and insecure teenager, and slightly depressed in college; my really fun times came later.
January 26, 2016 at 8:33 AM

Madame Là-bas said…
As a former "book nerd" girl, I have more fun now than when I was younger. Travel or an interesting conversation are my "fun." As I have grown older, I have gained greater acceptance of my definitely Canadian (the British background of the 1950's sort) personality. My "funner" part probably comes from my soupçon of French and Irish blood!
January 26, 2016 at 10:36 AM

LauraH said…
Fun wasn't a big part of my teenage years, I was fat, introverted and very insecure and out of it socially. My best fun was during my marriage, mid 30s to 40s. These days fun is a visit to the garden nursery, playing with my nephew, travelling.

Duchesse said…
Susan: Being amid natural beauty is fun, and also restorative. Kind of hits all the notes.

unefemme: I knew some Morris dancers back in those times so I know precisely what you got up to! Always figured it was fun because who would do it if not?

Mme: I knew many of those nerdy girls and they had fun, too, and that you're having it now is wonderful. Fun comes in many flavours; the important thing is to have it, and not care if other people think it's fun or not.

LauraH: Oh yes, a nursery is great fun! Which reminds me of a recent thrift store visit with a visiting friend. She found a mellow old leather satchel with a working brass lock and a black "patent leather' handbag (lined in fuchsia!) in perfect shape, and I found a big Fiesta serving bowl for $1.50. Then we went for a cocktial. All of it was great fun.

Beth said…
Looking at that photo of you is fun!! Oh, gosh, cycling through Mexico City is current fun, along with eating new food, drinking tequila, singing, hanging out with young friends. I used to love physical thrills like downhill skiing but prudence has triumphed; I care about my limbs staying intact. Fun is also fantasizing - my imagination is more active now than it ever was n my teens!
January 26, 2016 at 4:51 PM

Beth said…
Looking at that photo of you is fun!! Oh, gosh, cycling through Mexico City is current fun, along with eating new food, drinking tequila, singing, hanging out with young friends. I used to love physical thrills like downhill skiing but prudence has triumphed; I care about my limbs staying intact. Fun is also fantasizing - my imagination is more active now than it ever was n my teens!
January 26, 2016 at 4:51 PM

Kai Jones said…
Playing with my grandkids, planning and then running a Dungeons and Dragons game for my friends (who vary in age from 25 to 60), going dancing at the gay strip club with some of my friends (nobody hits on me, I can dance as wild as I want), planning a knitting or sewing project, learning something new-these are my ideas of fun.
January 26, 2016 at 5:23 PM

Leslie M said…
I used to have different fun, depending on the group I was with. If I was with my dad's family, fun was playing cards, trying to outsmart the cousins and impress my aunts and uncles. If I was with school friends, it was drinking, listening to live music and taking road trips to the coast in Texas. So, "not like Mom". At least we thought at the time. Now, I still have great fun playing cards with the step-kids and their cousins. Even more so when they win. The most fun was recently going to Athens, Greece and renting a car with my husband. We couldn't read the road signs and ended up driving down a pedestrian walkway (without hitting anyone or anything), but it felt so naughty and rebellious. We laughed liked we were school-kids, knowing we just got away with something we never would have tried in the U.S.
January 26, 2016 at 10:37 PM

Bunny said…
I was blessed to have dear friends, who are still dear friends, and we were a tribe. We had so much fun in my teen years and they are some of my best memories. If you ever saw the movie "American Graffiti" that is EXACTLY what our teens were like. Our cars and our music were everything and we cruised as much as possible, illegal drag races in the empty parking lots of Cape Cod Beaches ( easily over a thousand kids and always broken up by the State Police), ice skating nearly every weekend on a glass lake near my home, "parking" at the airport surrounded by our friends in their cars "parking", hitch hiking to Boston for a little excitement, I could go on and on. It was the best, spent with abandon and treasured allies. Such great memories and thanks for bringing them up, Duchesse.
January 28, 2016 at 5:04 AM