Franca Sozzani, eminent editor of Italian Vogue, spoke at Harvard on April 3 about health and the role of fashion in promoting thinness.

She asked, "What lead us to establish that thin is beautiful and that thinness is the aesthetic code we should follow? Why (has) the age of supermodels, who were beautiful and womanly, slowly started decreasing and we now have still undeveloped adolescents with no sign of curves?
Why is this considered beautiful? Marilyn Monroe, Liz Taylor and Sophia Loren today would appear in our Curvy channel and be defined shapely."
Sozzani has led petitions to close pro-anorexia and bulimia websites. At Harvard she said, "Trends change also regarding aesthetics, and today we accept such standards as the most normal thing. And this is a negative example."
She had, however, a second issue to address, that of "another eating disorder", obesity. She said, "The fashion industry is often pinpointed in connection with anorexia, though the food, and in particular the fast food industry is not equally linked to obesity" and claimed that "if you eat healthily you will not gain weight."
The speech (compete text here) is a bit all over the place, but her message is clear: lack of health education, powerful cultural imagery and the interests of certain industries have propelled a frightening propensity for unhealthful extremes on both ends of the spectrum.


Encouraged by her remarks, I browsed Italian Vogue's V Curvy, an online-only source of  sumptuous styling for women who despair of achieving superthin-fifteen-year-old bodies. The healthy-looking plus-sized models resemble many of my friends and me (though of course younger). "Daily Suggestions" offers inspiration built around basics we own, and sharpens the eye for what you'd add.

There's plenty of politics here, too. Check out the fascinating work by Anna Utopia Giordano, "Must be Perfect". Giordano altered images of ten of the most famous Venuses to make them match today's super-skinny standards, demonstrating, as the site says, "the madness of size zero". Shown, Francesco Hayez' "Ballerina Carlotta Chabert as Venus", 1830. 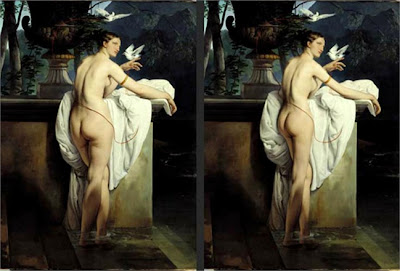 I have worked with editors of fashion magazines; held to financial goals, they know which models sell, and those are usually the wispy teenaged ones. They might talk about "size diversity" and "showing our readers real women", but no one has taken action like Sozzani has.
Brava, Franca!
Email Post
Labels: culture weight

Susan B said…
Good for her! (I do take issue with "if you eat healthily you will not gain weight" but others with actual doctorates in this area can and have addressed this better than I.)

Duchesse said…
pseu: I should have been clearer, V Curvy is not a print product, just online (and free). Vogue Italia did create a print edition featuring only large-sized women in June 2011.
April 5, 2012 at 9:16 AM

Swissy said…
Merci, Duchesse, for bringing I-Vogue's piece to our attention. After a lifetime, etc., I get it. I now advocate for my four lovely nieces, in hopes that they won't have such a struggle to conform.

And thanks, also for the lovely remembrance of Adrienne Rich. We saw a little reading of hers on PBS and it brought tears to both of us.
April 5, 2012 at 9:18 AM

Duchesse said…
pesu: I have linked to V Curvy. I suppose "eat healthy" includes eating reasonable portions, controlling calorie-laden snacks and curbing consumption of empty calories. I've long found these to be my most beneficial strategies, rather than any magic ratio of food groups.
April 5, 2012 at 9:21 AM

Anonymous said…
I rarely buy a fashion magazine anymore, for so many reasons, but mainly because I find them useless. I'm not interested in seeing clothes and 17 year old, very skinny girls. I've never even quite understood all of this from a marketing strategy. They show clothes that are hugely expensive, made for anorexic young girls, so who is buying this stuff? It's a different demographic that has the money to even contemplate the clothes shown (speaking in generalities).
Please do link to V Curvy and thanks for a great post, and the link to the rest of her speech.
April 5, 2012 at 9:27 AM

Editors tell me that fashin mags are "aspirational" so models do not look like real people. They contend that we would not want the clothes if shown on the average pear-or-rectangle-shaped woman. (A few will show 'real woman' features.)

Also, the intended demographic of mags like InStyle tops out at late 30s or so. Advertisers skew toward a young market except for specialty publications like More, and advertisers want the editorial content to match their target audience.
April 5, 2012 at 9:45 AM

Jean s said…
Interestingly enough, I'm dropping my subscription to More. Too much celebrity-focused news, too much uninteresting fashion, not enough thought-provoking writing. I get what I want from blogs like yours.
April 5, 2012 at 10:08 AM

lagatta à montréal said…
Tutto questo contenuto esiste anche in italiano! In Italian, she says "magrezza" (maigreur in French), which can be thinness but also gauntness and skininess. The opposite of obesity, and also a sign of ill-health.

Of course "if you eat healthily you will not gain weight" is very simplistic, but the whole speech is far more complex, and I think she has consulted health and biology specialists. Obviously another big factor is the relative decline in daily calorie expenditure - even typing on my computer, I am using less energy than typing on an old-fashioned manual typewriter many decades ago. She also cites psychological, social and chemical factors in eating disorders. She is certainly an educated person, but in letters, languages and philosophy, not sciences.

Some people are just naturally thin, but I think most of us have to reduce our portion sizes by the age of 40 or so, and certainly around the menopause.

hostess of the humble bungalow said…
Thank you for the link and bringing this subject to my attention...
April 5, 2012 at 11:14 AM

Debbi@SheAccessorizesWell said…
It is always easier for someone thin to say "all you have to do is". Having been thin and overweight I think I have a different understanding of the issue. I really appreciate your post as I wasn't really aware of V Curvy.
April 5, 2012 at 1:27 PM

Mary W. said…
Hmmm, that photo of Franca makes her look really skinny herself...which makes it hard for me to take her seriously on this subject.
April 5, 2012 at 4:47 PM

Duchesse said…
Swissy: Je vous en prie, and I'm happy that your nieces have you as a model.

LPC: And she *does*, it is not just PR blah blah blah.

lagatta: I interpreted "eat healthily" as also including portion control, not just food choice, maybe because I have read her other remarks on the topic. Yes, some people are natural greyhounds, and some gain more easily than others; Sozzani is emphasizing, at least in the speech, especially about the effects of social norms, which exist quite outside individual body types.

Sozzani has also taken aim at Fat Talk, which drives me wild, too. Almost every time I see one friend she says, "You look great! Have you lost weight?" (She is not the only one, but she does it every time.) How i would love to change that, and for now I am "being the change".

Debbi: You seem to think that a thin person cannot address the issues of obesity and anorexia. Her body weight does not disqualify her (or anyone else) from calling attention to what the culture is promoting, and in particular; she is eminently qualified to indict the contribution of *her industry*. I welcome hearing more about your "different understanding of the issue", if you are willing.

Mary W.: Again, the logic seems to be that a thin person has no business commenting on obesity or anorexia.

While I would not make any inference about Sozzani's eating habits based on her appearance (her twin sister is also slender), I'm now thinking about a woman who was self-identified as someone with an eating disorder, and who spoke out about it: Princess Diana.
April 5, 2012 at 5:19 PM

Chanterelle said…
Duchesse, I have one friend who always asked whether I'd lost weight. I finally took her aside to tell her that it made me uncomfortable and would she please stop--and she did. Interestingly, lately people seem to say "You look great" and leave it at that. I have recently lost 10% of my body weight, but around NYC to comment on someone's weight now seems to be Not The Done Thing.

Duchesse said…
Chanterelle: I am happy you spoke with her and also wonder, did she understand why you didn't want to hear it? I do think that there is a dawning awareness that a compliment tied to body size or shape reflects a certain bias.

I still hear so much Fat Talk, from saleswomen who tell me a dress makes me look "ten pounds thinner" to a (different) friend who recently said, "Those jeans are so flattering, HYLW?"" And women of any size and shape might hear it. I have a size 2 friend, Margaret, (naturally thin) who is always told she is "SO lucky".
April 5, 2012 at 7:00 PM

Thank you for the most interest links.

It seems that the media either promotes extreme thinness or obesity (now called "curviness"). Nobody shows "normal" women anymore. Up to age 40, I weighted 110 pounds on a five foot three frame. Healthy, with a shape, not fat, not skinny. Just normal, like most of my friends!

Does the media even know what "normal" is ? Kim K. is called "curvy" but she looks pretty normal to me!

All this is rather crazy....

Duchesse said…
Evita: The models shown on the Vogue Italia site are not obese (according to one frequently-used clinical definitions, a BMI of 30 or higher) and only "plus size" in comparison to the extremely thin standard-issue models. A size 10 woman is considered plus sized in the modeling world!

Occasionally, I have seen a very large woman, e.g. the singer Beth Ditto, in editorial print or occasionally on the runway. This is extremely rare. When Sozzanni released the Vogue Italia issue with all plus-sized women last year, she was accused by some of exploitation. Malcolm Harris of Huff Post thought it was "like a three-ring circus". (See http://www.huffingtonpost.com/malcolm-harris/vogue-italias-plus-size_b_870406.html)

From my perspective, the media are still intent on serving up the image of extreme thinness as the desirable state for women.
April 6, 2012 at 4:56 PM 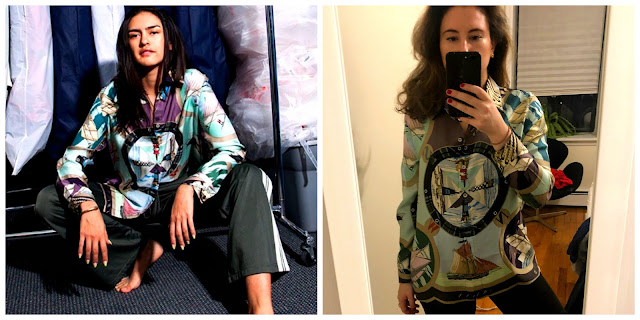 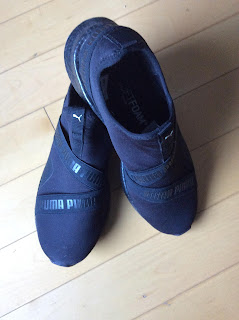