As usual, I like to check out all the stars in Toronto for the Toronto International Film Festival, even though I no longer live there.
Why, I figure, post photos of young starlets? You can find daily photos of these beauties here.
I'm more interested in someone close to my age, pun intended. Glenn Close is in town to premiere the drama "Albert Nobbs", in which she plays a woman who masquerades as a butler amid the social constraints of 19th century Dublin.
Here is Close in role; her strong bones and actor's skill make her quite convincing until...no, let's wait for the film. Rumour mill rumble is that Close wants an Oscar but the film is not strong enough. 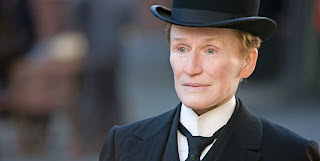 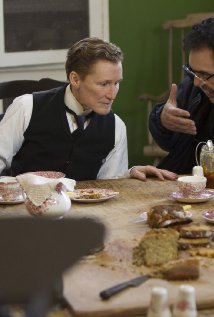 Another acclaimed shape-shifter, Meryl Streep, chose London to premiere her new Margaret Thatcher biopic, "The Iron Lady" as a charity event for Women for Women International. The film will be released in January 2012, in time for Oscar season. 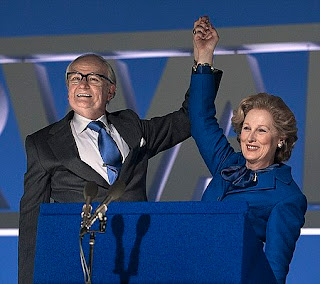 Now here is a power dresser.  Check this teaser, in which Tory advisors meddle with a young Margaret's image and provoke what will be, I predict, the immortal line: "Pearls, however, are absolutely non-negotiable."


Though separated by time and class, each characters assumed unflagging control of image as type of armor.

Their looks are not strictly historic. On the local streets, I sometimes see women who choose the masculine look (not just a menswear piece, the entire ensemble and grooming), and more often, I see an every-cell-in-place Thatcher lineage.
In the blogworld, we talk about the pieces that make us feel invincible, our "power" or "hero" pieces. We share some slight affinity with these two women, whether we admire them or not. We have learned to temper that rigour with  ease; perhaps we have less at stake.
I'm eager to see both films. With Close, I'll await the scene where her identity is revealed, to see the feminine meld with the masculine. When I watch Streep as Thatcher, I'll want to muss her hair and grab a metal detector to try to find her heart.
Email Post
Labels: body image culture film

Susan B said…
I've heard about the Thatcher movie, but not the other one. Both are on my radar now, thank you.

What I love about both of these actors is that they just seem to keep getting better. They've both honed their craft to the point that they can bring in a range of characters with an ease that never goes over the top. (Think of how easy it would've been for Streep's Julia to become caricature in the hands of a less deft actor.)
September 13, 2011 at 8:49 AM

Unknown said…
Am a great admirer of both actresses. Liked the utube trailer and greatly look forward to the film next year. Whether you agreed with Margaret Thatchers politics or not she certainly had character and I anticipate that Streep will be able to pull it off.
September 13, 2011 at 9:03 AM

materfamilias said…
That photo of Streep in pearls, dark suit -- she has absolutely caught Thatcher's bearing. The film will be a must-see. I've read some of the reviews you're alluding to re Close's film, but, of course, I'll have to see it for myself. Couldn't miss something with her in it. Both such stellar actors and they seem admirable otherwise as well -- and certainly models of women looking beautiful at and beyond a certain age.
September 13, 2011 at 9:22 AM

hostess of the humble bungalow said…
My goodness Meryl actually looks like Thatcher!
Like Helen Mirren she just gets better with age.

CompassRose said…
I just saw Albert Nobbs at TIFF, and Close IS very convincing; her character is a weird little man, but the kind of man that one DOES meet, every now and then. Even better, though, is the untrumpeted Janet McTeer, as a very different kind of woman also dressing as a man, for very different motivations.

And yes, the film is weak; it has some very good moments, but does not as a whole hold together well enough for greatness.
September 13, 2011 at 11:49 AM

Susan Tiner said…
The second photo of Meryl as Thatcher made me do a double take Streep looks so much like Thatcher!

"We have learned to temper that rigour with ease; perhaps we have less at stake." Maybe we do have less at stake, but it seems that even power dressers like Christine Lagarde dress with more ease these days than the iron lady.

I'll add these to my list of films to see. One of the things I'm most looking forward to about returning to city life is being able to see more movies.
September 13, 2011 at 12:59 PM

Duchesse said…
pseu: Yes, that is Streep's magic, even when she is playing "Just a character" rather than someone famous.

chicatanyage: I 'so can't wait' that I am going to see it in Paris next month instead of waiting for NA release.

hostess: Yes, those are all favorites of mine, too and each is so different from the other.

Pam: The Thatcher film will probably have wider release due to the fame of the subject.

Slowest Sewist: Though I do not normally download films I might have to do so for Nobbs.

CompassRose: Lucky! Now you have me even more determined. Am eager to see Mia Wasikowska, too. Some say McTeer might get a supporting role Oscar nomination. Thanks for your report.

Susan Tiner: Thanks for that observation; yes Lagarde is more relaxed in her style...could be also that it's 30 years later.

emma said…
OMG! - Streep's a shapeshifter, but she INHABITS Maggie Thatcher in that photo.

A friend just had a Meryl Streep Retrospective film fest with her daughters. She said her acting in Out of Africa has really stood the test of time.

I've appreciated Glen Close this year in the TV program Damages. (DVDs from the library...) She plays a ruthless lawyer...representing the little person in class action suits...but you still shouldn't trust her one iota.

Thanks for this column - you're right, the starlets are a dime a dozen, but seeing mature women with style and presence, that is worth a standing ovation!
September 13, 2011 at 9:27 PM

Tish Jett said…
Brilliant post. Fascinating approach to the subject. You are more than a beautiful writer, you are a creative observer.
September 19, 2011 at 10:33 AM