Every holiday season, I think of those for whom cheer is not on the menu. This year the thought strikes close to home, because one of my oldest Susanfriends lost her husband in early November.

Gone, far before anyone expected, is their tradition of cutting their own tree. Susan loves craft shows, and though we went to one in Montréal last week, there was no more searching for the perfect treat for him.

I was reminded of a Christmas 19 years ago. Le Duc's best friend, Harvey, had died just a week earlier. For years, Harvey and his family had joined us for Christmas dinner. He and Le Duc cooked elaborate menus while the kids played with new toys. That year, Ingrid and the children came with his parents, a dignified couple who stumbled through the evening, still in shock. "Well", someone said to me, "I guess that ruined your Christmas!"

Not really; it was profoundly sad, but isn't the real purpose of the season about connection and community, about giving—and not in the material sense?

I enjoyed those years of pounding footsteps way too early on Christmas morning, of the wonder in our sons' faces as they looked into Christmas windows, of the vaulting hymns of a Christmas Eve service. I'm still pleased by a box of chocolates on a table, a tray of cookies.

But always, I'm haunted by faces on the street who look bereft amid the bounty, and wonder what the manufactured merriment does to people who are unable to summon joy, for whatever reason. We put a date on the calendar and the message is more or less, be merry or be left out.


The other one that chokes me up, every time, is "I'll Be Home for Christmas" which younger persons often think is about catching a flight to see the folks. Not exactly; it's a WWII song, first recorded by Bing Crosby in 1943, the midst of the war. (The other side of the single was "Danny Boy"; talk about a sobfest.) There are many versions, but the Frank Sinatra one is my favourite.

My favourite religious one is "Ave Maria" (the Catholic prayer version), especially when Rufus Wainwright performs it live. It's not only a Christmas hymn, but you'll hear it often during Advent.

Here, we say "Merry Christmas" and "Joyeux Nöel", to friends and strangers alike. The bland "Happy Holidays" pops up too, but Montréal, a city stuffed with churches, retains more religious tradition.
Perhaps we should have a variant, something like, "Peace, friend".

I've spent a decade in the Passage with you, and sense that whether you observe Hanukkah, Christmas or a non-denominational season, you will make room at your table, in your heart, and through your giving for those who are struggling. 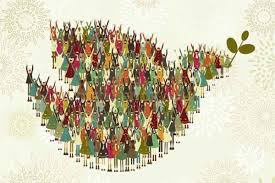 The Passage closes from now until January 3, 2019.
Thank you for reading and commenting, and see you soon.

Laura J said…
The “festive” season illuminates so much of the human condition — our generosity our loneliness our seeking for finer/higher/spiritual feelings and so many others. a thoughtful posting. Peace joy and health to you and your family. Thank you for your blig
December 20, 2018 at 8:31 AM

LauraH said…
So much that I could say. For many years after my husband died I spent Christmas dinner with my sister and her family. It was never good, I felt like a stranger looking on from outside. So a couple of years ago I decided to try something new and now I spend Christmas with myself. It has worked out better than I thought. My cousin has lost both husband and daughter and recently told me she just wishes the whole thing would go away. It can be a very difficult time of year. Thanks for understanding.
A peaceful and happy Christmas to you and your family.
December 20, 2018 at 9:00 AM

materfamilias said…
Such a thoughtful post, K. Christmas can be a wonderfully rich time, light and hope and the promise of peace shimmering in the darkest, shortest, coldest days of the year, but it can also be so coercive. So many get caught up in the 'shoulds,' and not being able to live up to implied jolliness (or simply being unable to recreate tradition) adds another level of punishment to bereavement or other loss.
Wishing you and Le Duc and all your family the smaller, more constant joys and satisfactions of a home filled with "all the feels" as the kids say. . . Thank you once again for your wonderful blog, and See you in the New Year!
December 20, 2018 at 9:16 AM

Rainbowsandglories said…
Duchesse, what a beautiful loving message from you today, followed by thoughtful comments. Thank you Duchess for your constant wisdom. Thank you readers for your heartfelt, generous spirits.
I wish you, those you love and those who love you, peace
December 20, 2018 at 9:50 AM

"So we are told this is the golden age ... gold is the reason for the wars we wage"

As you know, a friend is going through difficult up-and-down health crises affecting her husband.

It is very low-key for me; some human friends, fish dishes and a duck tourtière, and Livia the black cat of course.

We do also say "Joyeuses fêtes" referring to the period encompassing Christmas and New Year's, which was the major celebration.

JohnInWI said…
My youngest son is boarding a plane at Pierre Trudeau Airport as I type this. We will have a "weird" Holiday as our excitement to see our son is tempered by the murder of our young niece last week. Life is strange that way. -Lily
December 20, 2018 at 12:26 PM

Duchesse said…
Laura Jantek: Yes, many feelings besides a consumer-oriented frenzy. This year more persons than ever have spoken of their wish to back away from the overwhelming commercial element.

LauraH: I had a friend who, facing a first Christmas as a single parent, decided she wanted nothing to do with it and took her two children to a Malaysian island where Christmas was not at all prominent. It was their sole gift. She said she really appreciated the break, and the kids had a wonderful adventure.

materfamilias: About the shoulds: an old friend wrote that this year, she is bringing only one contribution to Christmas dinner at her brother's and asked me, "Remember when we did it all... how did we do it?" Now is time to bring the dish of sweet potatoes ;)

Lily: What a deeply tragic event. I am so sorry. Yes, life does not unfurl according to calendars and that is one of the very worst things to happen to parents and a family.

lagatta à montréal said…
Yes, I found it easily. Good old Christmas in the drunk tank, after some rousing fights and nights in smoked-filled bars!

Martina said…
This hit home today...my sister and I were talking about how much we miss our parents this time of year. It’s been a while , but still it would be nice to celebrate the holidays with them. Instead, we’ll raise a glass to their memories, and hope that somewhere they know that they are loved and missed.
December 20, 2018 at 7:35 PM

Marina said…
It is going to be our third Christmas since my husband died. Suddenly and unexpectedly on December, 22nd... Kids are with me. Hard time is never too far away, especially at this time. My three boys are playing a video game together as I type, and that is a blessing. I am greatful I am not alone in my sorrow and my happiness.

Hugs and Best Holiday Wishes to you and yours, Dear Duchesse! Your blog is the BEST out there. Thank you for all your posts, funny and sad, full of cheekiness and wisdom.
Love from N. California,
Marina
December 20, 2018 at 9:18 PM

Wendy said…
Merry Christmas to you, Duchesse and thanks for a year of wonderful posts. This will be my first Christmas in retirement after 20 years delivering the mail. I feel so fortunate to not be working 12+ hour days and stressing over how to get all the Christmas prep done in time. I'm so looking forward to fun with the grandkids, but there is saddest,too. My mother's dementia is progressing quickly and my daughter-in-law's dad took his own life a few months ago. Holidays can be hard, for sure.
December 20, 2018 at 10:24 PM

Champycorn said…
Duchesse, Merry, Merry Christmas to you and your family! Thank you for the inspiration and learnings through your wonderful blog throughout the year!
December 21, 2018 at 12:50 AM

Margie from Toronto said…
I find that as I've gotten older I enjoy a much more low key style of Christmas. I'm single and none of my family lives nearby anymore so I often spend the day on my own or with a couple of friends and I really don't mind. The time before is so hectic with social events, entertaining and volunteer activities that I'm often glad of some downtime.
This year I have been persuaded to travel to my brother's for Christmas with his family and then a couple of nights with my best friend who lives in the same city. I am looking forward to it but I will have to "gear up" a bit not to be in my own little apt. - I find being around a lot of people can be a bit overwhelming after living on my own - even though I grew up in the midst of a large family.
I would also like to thank you for all your wonderful, thoughtful posts throughout the year and a very Merry Christmas to you, your family and all your readers.
December 21, 2018 at 8:19 AM

Maggie said…
Thanks for your reflection on the emotional complexity this season. I wish you a happy Solstice, Christmas, and New Year.
December 21, 2018 at 1:04 PM

Jane in London said…
Thank you for focusing our thoughts with this timely post, Duchesse. For me, the ultimate Christmas song is Greg Lake's "I believe in father christmas" - which I understand he wrote as an antidote to commercialism.

My favourite album for playing at Christmas time is Jethro Tull's "Songs from the Wood" which is so evocative of our English winter solstice.