Over the summer, I went to the Balenciaga: Master of Couture exhibition with my friends Judy and V. (The show, organized by London's Victoria and Albert Museum, is at the McCord through October 24, 2018, so if you're in Montréal, hop to it!) 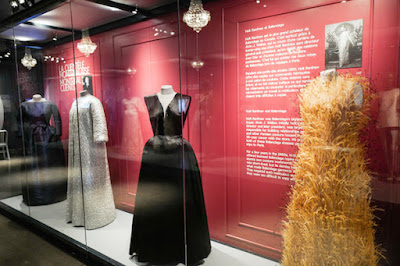 Those clothes were temples to design and construction; brocade evening gowns and plush tweed suits   summoned an art imbued by restraint, yet infused with emotion.

That day, V. and I wore linen, loose and light against the 39F temperature; we looked like a couple of retired yoga teachers. Judy wore a fitted, long-sleeved and high-buttoned heavy-cotton blouse she had made, and black jeans. She was fine in the air conditioned museum, but when it's so hot your lipstick melts, she might have had an unpleasant trek home.

Our roaming chat was about the deceptive simplicity of the work, and of the bodies they were made for. The clothes seemed nearly alive—for Balenciaga dressed every age and size with equal assurance, from a debutante's 19-inch waist to an opera-singer's majesty. Judy took one of the show's coat patterns, provided in small format, and determined to make it.

X-ray photographs (by Nick Veasey) of some gowns showed the inner construction; like opening a jewel box, we could see the true artistry: 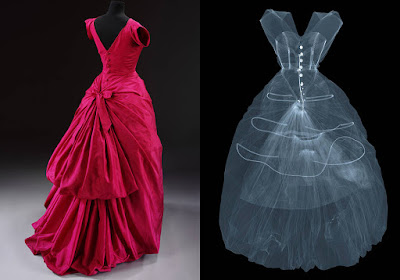 The clothes, from ball gowns to day suits, but particularly the audacious hats, evoked the same feeling in me that Charles James's did at the Met: wistful longing, nostalgic admiration. Hats! Where did they go? 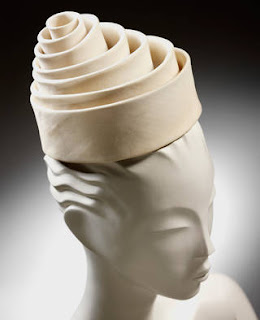 In everyday life, the world has moved to jeans and tees, whether Gap or Loro Piana. But floating in a Balenciaga was apparently an altered state; Susan Irvine's article, "The mysterious Cristóbal Balenciaga" (from the Telegraph) eloquently describes the sensation.

Also on our minds was the price women (or their partners) paid for these sublime creations. The consensus was that even with the means, we'd have trouble spending half the average annual income of a middle-class person on one suit. A magical feathered and beaded evening gown, the text noted, was worn but once. Some of the women who could afford that make other choices today. The Duchess of Cambridge re-wears her dresses; that never used to happen.

A few weeks later, my Parisienne girlfriend Huguette hit town. During our drift through the same exhibit, we entered a reverie about our wardrobes during the 1980s, when we lived in the same city and had to dress for success, or maybe a successful date. I remembered her Alaïa, she recalled my Kenzo.

The difference is, she will still crack for some fabulous garment, because she enjoys that level of fashion and beauty. She appraises my current wardrobe like a renovator scrutinizing a zombie house: What happened here?

"Should you no longer have the money for those clothes, then what?" I asked over lunch, a bit sternly but then, she had just calculated how much an eventual retirement home would cost her, and was mildly worried despite her glass of rosé.

"Oh, I have a friend like that", she said airily. "It is done with the scarf, the shoes, the bag. No one cares what you have below your waist, a €100 pair of trousers looks like a €250 pair when you're sitting in a restaurant."

That quote, I thought, captures our pleasure in a pair of pure white sneakers or the joy of a snuggly knit scarf that's just the right weight and colour—though "sublime" implies quality. I recalled an interview in which Germaine Greer, acknowledging her mature shape, said she would now "dress like Italian women, in beautiful fabrics."

And then, the dispiriting denouement. Another friend e-mailed to say she saw a man in an airport wearing these, and people were surreptitiously photographing him: 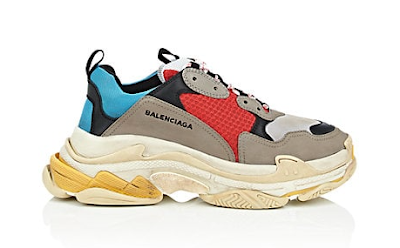 Discretion be damned. The master must be rolling in his Spanish grave.

Mary said…
I saw the Balenciaga exhibit at the V&A in January. The Lesage embroidery caught my eye, especially as there was such a wonderfully detailed explanation on how it was created, as well as a an amazing pink/white coat created from the technique.

LauraH said…
Love the idea of the x-ray photos, it's fascinating to get a peek under the surface. His clothes look like you could move in them. I was rather shocked at the restrictive and binding nature of the clothes in the Iris Herpen exhibit at the ROM. Did not feel modern at all.

Jean Shaw said…
Does your friend Judy know about the Center for Pattern Design? (www.centerforpatterndesign.com) They have a couple of Balenciaga patterns.

Vancouver Barbara said…
Thank you for this and the link to the marvellous Telegraph article.
October 11, 2018 at 12:06 PM

Eve said…
I saw the Balenciaga exhibit this summer and although I was dazzled by the architecture of the clothes, I could not help but think how dated it all looked. Stiff shapes, heavy fabrics, it must have felt like wearing a house....another world really !
October 11, 2018 at 12:42 PM

lagatta à montréal said…
I don't even know what to call those hideous shoes: not sneakers, trainers and certainly not running shoes! This is a civil blog, but I'd say WTF shoes.

I must get there; thank you for reminding us. The rosy red gown is exquisite, though I'd trip on it.

Indeed people of modest means would save up for a good suit (masculine or feminine) or other classics to an extent nobody would now, but they were expected to last many years. Certainly in southern Europe but doubtless also in other places.
October 11, 2018 at 5:00 PM

lagatta à montréal said…
I don't even know what to call those hideous shoes: not sneakers, trainers and certainly not running shoes! This is a civil blog, but I'd say WTF shoes.

I must get there; thank you for reminding us. The rosy red gown is exquisite, though I'd trip on it.

Indeed people of modest means would save up for a good suit (masculine or feminine) or other classics to an extent nobody would now, but they were expected to last many years. Certainly in southern Europe but doubtless also in other places.
October 11, 2018 at 5:00 PM

LauraH: The show had a cape that converted to a skirt- a copy we could try on. Very comfortable.

Jean Shaw: She will now, thank you. The coat may be attempted by a novice to intermediate sewer, but I could see how so many of his designs look simple but are not.

Eve Benoit: Some of it looked dated to me, could have been from the 18th century— and there was that whole section near the end, with contemporary designers like McQueen, who were influenced by him. I agree that fabrics were heavier then; you don't see many brocades and double-faced satins even in current couture. Laces like he used are out of production except as art pieces. The documentary "Dior and I" about Raf Simons' tenure at Dior discussed the rarity of such textiles and embroideries.

lagatta: Meant to be sneakers but essentially status symbols.

Susan B said…
Oh, that looks like a fabulous exhibit! I think you really have to see these pieces up close to appreciate the artistry. And yes, a toast to those simply perfect, sublime pieces.

I saw a woman (in her 60's) in a pair of Balenciaga sock sneakers at the market a few weeks ago. They're probably quite comfortable but other than status signaling, I just don't get the appeal.
October 11, 2018 at 8:20 PM

Duchesse said…
Une femme: I believe we say a lot, consciously or not, by our appearance.
Son went with buddy to rent first apt. He wore a death metal sweatshirt. I said, Did you get it? He said, No, he rented it to a girl in Lululemon. ». Big Lesson for him.
October 11, 2018 at 10:42 PM