Karen showed me her new home, with a private guest suite on the ground floor; stone walls and wide French doors opened to a terraced garden. Everything in that room, from the bright quilt on the antique metal bed, to the stacks of photopgarphy books, made me sigh with pleasure.

Nearly every woman I know has a retreat fantasy, and a few have the real thing. Friends and acquaintances who keep such places are of average to average-plus means, but they have made rooms of their own a priority.  Berta says that she would rather rent a studio in Mexico, where she can paint uninterrupted for months at a time, than own a car.

These are not family vacation places—they are solo abodes that might stretch to an occasional guest: a bed, a desk, a small dining table, a basic kitchen and bathroom. 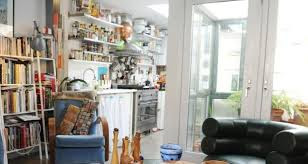 Lucinda owns a tiny "one above, one below" in Dublin, where she has stayed from a few weeks to a full year, for thirty years. The guest bed is the top of the dining room table.

Carole shares her parents' lakeside cabin with her siblings. She spends about two and a half months each year there alone, in two or three chunks.

Alana reserves a room in a rural retreat center that accepts guests even if they are not participants in an event; this is especially convenient because the meals are provided. She books a month in summer, and returns for shorter stays of a week or two through the rest of the year.

Lynne, a writer, seeks colonies where artists may qualify for use of a cottage for up to three months, to do their work in a quiet, supportive setting. She has to keep looking and applying, but when something comes through, she jumps on it. If she does not qualify, she rents a place in Cape Breton, always with a view of the water.

Women in their rooms: what do they do? They create, commune with nature, decompress. Some take time away from relationships that are treasured but taxing. At least three whom I've known cite their deep need for solitude: not to get away from anyone in particular, but to exist, for a period of time, in the absence of distraction.

Two weeks ago, I sat in R.'s apartment high in a heritage building. Family and friends visit occasionally, but it's her place.  Pearly late-winter skies spread beyond  a bay window glazed with the original leaded panes. She has chosen a white-and-cream palette for her few furnishings; the beautifully-proportioned rooms provide all the decoration needed.  She pushed her coursework aside to make room for our glasses of wine. As we watched the light shift over the distant mountains, I thought, What woman would not love to have this?

Readers with partners might think, There is no way I can manage that. But each of the women I've mentioned is with someone. (Several have grown children; two are childless.)

Needless to say, each has a partner who supports such absences, even though they don't need it themselves. Alana said that at first she felt selfish when she left her wife, Estelle, for a season, but Estelle told her the Alana who returned was a definite improvement.

A few couples have taken solo sojourns since they have met, but more and more, I'm hearing about women who seek their own space after decades of vacations spent juggling everyone elses' needs. They speak of the joy of independence, of the blend of freedom and responsibility, of a return to the essential woman who was submerged in other roles.

Trust is the silent partner in such sojourns. Berta's husband, Ted, who, when asked for the first time how he would feel about her taking a solo winter, replied with his characteristic laconic humour, "As long as you're coming back, Bert, you can take your time."

Someone at that studio loves Nick Drake's languid ballad, which, come to think of it, is perfection listened to in a private space.

hostess of the humble bungalow said…
I really enjoyed reading this post....it reminds me of a book that I once owned called A Room of Her Own by Chris Maddon...but it also brings to mind the Virginia Wolf book A Room of One's Own...
It is such a luxury to have a place like this to retreat to and relax, perhaps, write or paint...

My husband and I are part owners in a cottage on the waterfront on a Gulf Island in BC..this place is my retreat, a place for renewal, walking in the natural surroundings and recharging.

Thank you again for your lovely blog posts.

satsumi said…
Thank you for bringing this up. I'm as "selfish" as the women you describe .... and my family is the more harmonious for it! When we moved into a four bedroom townhouse last summer, I claimed the intended master bedroom as my personal space, decorated it as a Fake Tropical Hotel Room, and now have a candle-lit sanctuary at my disposal whenever I need a mini-vacation .... which is frequently.
April 26, 2018 at 5:51 PM

Duchesse said…
hostess: I had Woolf in mind, thanks!

satsumi: That is often the Gateway Room. And the next step is a more removed absence, and not just from family. But when I. think of it, some of the women do have visitors. They are careful though, to claim a serious sequestration. The home-based sanctuary is entirely important in its own right.
April 26, 2018 at 8:02 PM

Susan B said…
That's one of my favorite songs of all time. The past couple of years I've taken short vacations on my own. Even though I meet up with friends for intervals at my destination, it's wonderful not to have to answer to anyone else for my time.
April 26, 2018 at 9:45 PM

Madame Là-bas said…
I find that I require "alone time" on a regular basis. My accommodation need not be luxurious but reading, writing, watching and walking in a different country renew me. I'm a more urban than rural person so some cafés and markets are good. I read all night, eat when I want to and answer to no one.
April 28, 2018 at 12:56 PM

Duchesse said…
une femme and Mme Là-bas: : You two have distilled it: not having to answer to anyone else!

They are not travelling, beyond getting to the place- solo travel is a slightly different stripe of "alone time". Some are just settling in somewhere else (like you, Mme) and others are working at creative endeavours. The one who goes to the retreat center is engaging in contemplation but the place where she stays is not attached to her faith.

Another longtime friend contacted me after reading this post to say she will walk the Camino de Santiago this year, realizing a lifelong wish.

Beth said…
In my former home, I had a studio/retreat room of my own in a separate building on our property, looking out on my garden. Adjusting to sharing a studio in Montreal and not having my own space was the hardest work I had to do when we moved -- and the second hardest was not having that garden. But I don't really want to vacation on my own. We both feel our time together is precious, and we'd rather spend our adventures a deux. It's ordinary days when I sometimes feel the need for solitude, so I stay home if I feel that way, or go off somewhere in the city by myself.
April 28, 2018 at 9:28 PM

Duchesse said…
Beth: Your former studio sounds idyllic. I can guess how demanding the adjustment was. The women who inspired this post do not take solo vacations (which may be a reason their partners are so supportive of their periodic sequestration.)

I also know a good number of persons who take some solo vacations because their partner does not share their interest in something they love to do, so off they go, either alone or with a like- minded group.
April 28, 2018 at 9:55 PM

Dr itGirl said…
My creative side really craves a healthy dose of solo place every once in a while. I imagine a dream retirement spent in a solo space where I can work on creative projects all week long. I enjoyed this post. Thank you!
April 30, 2018 at 8:39 PM