The past summer, and right into this warm fall is terrific for people-watching; coats come off, and anyone can see what was on people's backs and feet. I have begun to consider the difference between how older woman dress, versus younger.

There's more crossover than when I was a young woman. No one my mother's age wore miniskirts or floppy bellbottoms. Girls who embraced the preppy model were less individuated; they and their mothers favoured twin sets, hairbands, circle pins, those little handbags with buttoned covers. But for me, wearing things my mother didn't was kind of the point.

Now, the dividing line has blurred, with three generations in jeans, t-shirt dresses, maxi skirts. And preppy's coming back; J. Crew have clearly re-prepped after a several years of trying to be the low-rent Marni, with offerings like this shirt: 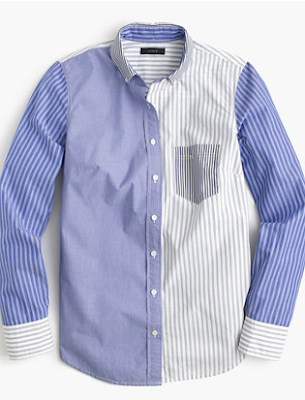 1. Coordination
The young women throw it all together, rarely coordinating, but there is of course thought in that un-matchy ensemble.

I had lunch with two friends in their late 50s; one was entirely in hot pink and white, down to the bag and lipstick. While she looked "perfect", the youths passing by on the street looked different; not better, but different.

I'm not saying she should change her outfit, just that there is a divide.

2. Coiffure
From messy braids to beehives, many young women wore retro or folkloric styles—not to mention young men in beards and haircuts summoned from daguerrotypes. 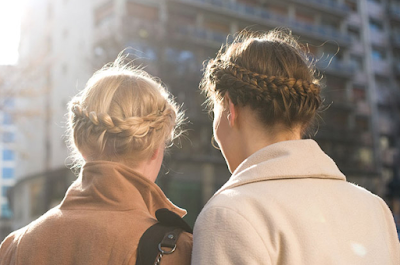 Older women with mid-to-long hair chose high or low ponytails, or a bun, of which the best were not too 'done': 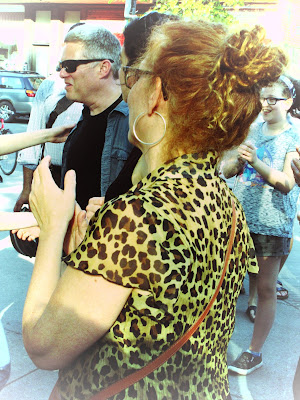 I saw a great deal of short hair on young women, which I hope refutes the belief that short styles spell 'dowdy'.

3. The embrace of "ugly"
I watched a twentyish young woman and her boyfriend shop in a thrift store; she honed in on a track-suit top in aqua poly with hot pink v-shaped inserts and a white waistband. I thought it was hideous, but she cooed with pleasure. Bulletproof synthetics, bumpy brocade, ratty lace: somewhere, a university student is amplifying her natural beauty in something you would burn.

At the same time, they have a nose for the tiny shift; no cut is truly timeless. 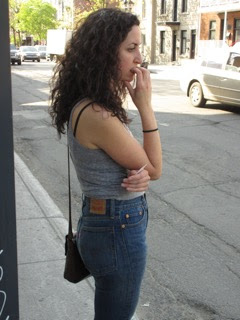 I shot this young women in high-waist Levis— I can't tell if they are new or vintage. We might find them a throwback (and for me, a welcome one), but for a Millenial, they're fresh.

4. Ink
I got a mammogram; the x-ray technician was a walking frieze. My favourite local restauranteur, Nada, looks like the star of "Blind Spot", not a plane unmarked.  A great deal of this work is artful and lushly ornamental.

I stopped dead in my tracks to stare at work like Fabrizio Divari's; if getting that done, the owner wants you to look: 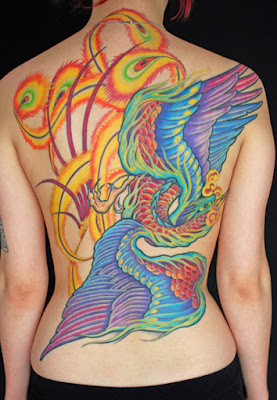 I have seen the occasional tattoo on women 50, 60, and even older, but not the full sleeves or legs the 30ish crowd like. However, unlike the track suit top, a young women is going to have those tats for life, so I hope she chooses images she will enjoy for a half-century.

In time, she can re-colour, but she will not be able to restore the lines' crisp definition. In a few decades, there will be a generation whose limbs look permanently out of focus.

Shared space: joined at the toe

When I was young, the highest heels, from stilettos to Bowie platforms, belonged to us. Now, young women wear Adidas with chiffon dresses, brogues with summer skirts. Their attachment to the podiatric crime known as the flip-flop has waned. I see twenty-five-year-olds and their grans in Birkenstocks; the kids are wearing theirs with socks. 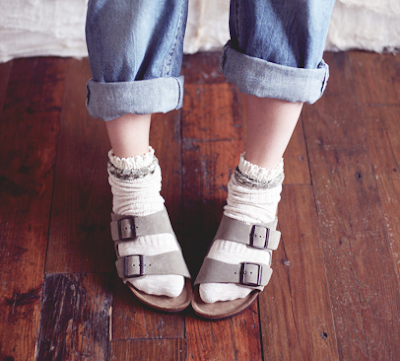 Though the young show more skin, this summer it was notably pale; a deep tan was an exception. (I try not to be a scold, but when I saw a young woman in a brimmed hat, carefully applying sunblock to her toddler, cigarette dangling from her lips, I wanted to ask why she was intent on making my generation's worst mistake.) 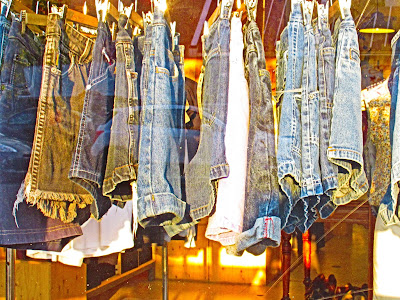 All too soon we'll swaddle in down parkas and mufflers the size of pup tents; my camera will be shoved away till my fingers don't freeze. But for now, the vintage stores show a rack of cutoff jean shorts (which women have worn for what, fifty years?), and the older crowd enjoy light skirts while they can.

The Vivenne Files said…
"...after several years of trying to be the low rent Marni..." I've tried for months to put into words what J.Crew has been doing, and you NAILED it!
hugs,
Janice
September 27, 2016 at 7:40 AM

LauraH said…
Enjoyed your analysis of the generational differences. What to wear can be confusing for me. At 62, I've still got that question running through my head when I shop or dress...is that (whatever) too young? Lately I've branched out into leggings + tunic for comfort and functionality. But still question the appropriateness. Sigh.
September 27, 2016 at 9:08 AM

Susan said…
Ahh----I would love to wear socks with my Mephisto fisherman sandals, but on my it would just look dowdy. I can get away with it out at our farm.

I don't want to be a scold either---but have to mention this. We have a friend who is a nephrologist. He tells us that he is seeing damage from ingredients of tattoo ink leaching into the body. Since he deals with kidneys, I think he was referring to kidney damage.

hostess of the humble bungalow said…
What a crazy picture I have now of that smoking mom...protecting her toddler from the sun but providing her with second hand smoke into her lungs....UGH!
I have noticed a lot of young women wearing those high waisted jeans and our daughter who is 37 loves them too.
She refers to them as mom jeans and I wear Not Your Daughters' Jeans!

Rafe's Hotel said…
LOL, mentioning fading tattoo ink made me smile. For me, young people who want to get tats have a perfect right -- it's a personal choice. But I find myself wanting to say, "Just consider what it will look like when your skin sags." Depending on where you apply the tattoo, that could be a catastrophe or no biggie at all. (If, for instance, I had gotten a tattoo on my neck, I would now be wearing turtlenecks in July. Not a pleasant thought.)

Susan's comment on the tattoo ink leaching into the body and causing trouble is frightening. Should be front page news for those considering body art. Mary
September 27, 2016 at 5:51 PM

Duchesse said…
Susan: The issue of the safety of tattoo ink is complicated because there are many different types. The FDA have not approved any ink for injection into the skin, and is studying the matter.

I regard the "just consider what it will look like when your skin sags" an argument that has lost its power because tattoos have been around for many decades so anyone young has long had an opportunity to see what happens, and where. But behind that is an aversion toward aging, which is even more unattractive than a wobbly bluebird on the stomach.

Sisty said…
Oh, if we ever stopped in our tracks and listened to what our parents' generation was trying to tell us -- an eternal lament. Before tattoos, it was pierced ears. I can't tell you how many heartbroken American pre-teens there were desperately trying to convince parents, usually fathers, that it was OK to let their daughters pierce their ears. Or cut their hair. I was one of them, and I had very liberal parents.

I'm personally not a fan of tattoos, but am willing to admit and accept that it's a generational thing. Years from now, when our kids are our age and we've passed on, tattoos will be regarded differently, I'm sure of it.