Yesterday marked our 30th wedding anniversary. Le Duc and I walked to a bistro in early-spring twilight, and reminisced about the tiny wedding in front of our fireplace, at which the minister said, "In the presence of these witnesses, and this cat, I pronounce you husband and wife."

This shot was taken on Kodachrome with a pocket camera, but shows that some things haven't changed: I'm in pearl earrings and low heels—and a man in a classic dinner suit always looks handsome!

I'm waving the marriage license, below. Maybe this was shot for the benefit of my proper mother, as proof. (They attended our religious ceremony, six months later, which was, for her, the real one.)

Back to those earrings: they were clip-on fake-pearl chandeliers bought in London ca. 1983, but almost lost that evening, when the wedding party of five went clubbing. A man on the dance floor retrieved one and said, "Did you really just get married? I hope you're as happy as we have been."

The cotton dress, by Chacok, wasn't traditionally bridal, so I could wear it for years. (Thirty years ago, as today, I did not understand the logic of buying a beautiful dress for one wear.)

The 30th is traditionally the Pearl Anniversary, but Le Duc especially likes coloured stones, so gave me this graceful pair of spinel dangles. The gems are from Pierres de Charme, the design by Pam Chandler of Artwork by Collins & Chandler Gallery, Toronto, our jewelers for almost as long as we've been married. Though they look like hoops here, they're threaders that form ellipses. 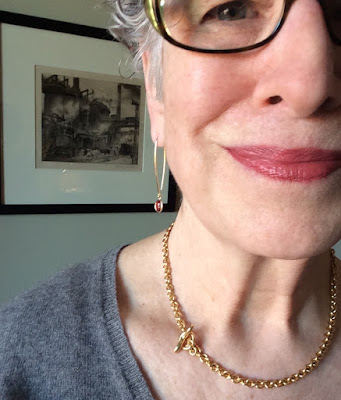 My gifts to Le Duc were Costes cologne, a nod to our honeymoon in Paris, and a pair of cocktail glasses which we raised to toast love, good luck and our wish for many more happy, healthy years!

LauraH said…
Happy Anniversary! I loved the photos and the earrings, both then and now. So nice of you to share special memories and times.
March 20, 2016 at 10:27 AM

Patricia said…
Happy Anniversary! Your wedding dress doesn't look at all dated (unlike mine!).

Cathy said…
Happy Anniversary, and many more to come. The new earrings are great, good for all occasions. I also like the gold necklace you are wearing in the photo, it is a nice weight.
March 20, 2016 at 1:45 PM

hostess of the humble bungalow said…
Happy Anniversary. Gorgeous photos of you then and now.
March 20, 2016 at 1:49 PM

Duchesse said…
Cathy- It is from the same jewelers who made the earrings, and an anniversary gift at least 12 yrs ago.

Patricia: Pieces he and his wife designed are in the permanent collection of the V&A. Those earrings would be unbearably '80s today but- I should have kept them and hunted for someone who could take on the repair.
March 20, 2016 at 2:43 PM

Francie Newcomb said…
Happy Anniversary, you are so beautiful in all the pictures! What lovely earrings!
March 20, 2016 at 4:43 PM

Wendy said…
My own husband surprised me with a small diamond and sapphire pendant on our first anniversary and I find I love it even more now than we he gave it to me. Jewelry associated with special occasions or milestones are so much more special.
Congratulations on thirty years of marriage--no small feat!
March 20, 2016 at 7:20 PM

lagatta à montréal said…
What a lovely surprise in my e-mailbox. Where is the cat?

I expect that you found a lovely place to celebrate your anniversary, whether at home or in one of the many intimate restaurants nearby. This year, the 20th is also the vernal equinox here, and of course the celebrations of Saint Pat's and Saint Joe's (San Giuseppe, with the requisite zeppole pastries).
March 20, 2016 at 7:24 PM

Liz Rice-Sosne said…
Happy Anniversary. You were and are lovely. Ha! We were married in front of the space heater. I wore a grey suit. We were married by a Rabbi. I wanted my minister to share in the officiation but she (our Rabbi) said no. I have to count on my fingers here, we are incredibly happy 34 years later. I love your blog, I love your style. I just wish that I could show you some of my pearls. I had a boutique many years ago. I did not sell fine jewelry. However, when I went to market several times a year there were always fine jewelry vendors who came to market to sell buyers pieces for themselves considerably under price. I always bought pearls.
March 20, 2016 at 9:12 PM

Liz: Ohhh, I would love to see. Other readers have sent photos ;)

Congratulations to you, too. After 34 years, I have seen times change to include more interfaith celebrations.
March 21, 2016 at 8:02 AM

Mardel said…
Happy Anniversary! Beautiful photos and lovely jewelry (which does not surprise).

We were married at home, by a judge as we could find neither a rabbi nor a priest who would officiate. However my parents refused to attend a church wedding anyway, as he was divorced. This coming October would be our 30th. I am not sad, but grateful for the 27 wonderful years we shared. Hope you have many more joyous years together.
March 21, 2016 at 9:00 AM

dana said…
Gorgeous young crazy kids! and Look at that 80s hair and jewelry. And legs for days. Bonne anniversaire! Or is that for birthdays?

March 13 is a good day -- my dear friend Barbara wrote that day was her 53rd anniversary. She is 80 and still a working academic. She reported that they "Got married the weekend before I started auditing neurophysiology at the medical school, a few hours after I turned my thesis over to the typist. !!!"

Please do tell more about spinel. I only know it as black from Wendy Brandes's collection. Your new earbobs seem to be a slightly smoky shade.
March 21, 2016 at 9:47 PM

Jonz said…
I love seeing these photos of you and seeing how you've been consistent over time. You're like two bottles of wine, getting better and better. Happy Anniversary!
March 22, 2016 at 10:55 AM

diverchic said…
I miss seeing your full on smile as you show in these joyous shots! It it infectious. Congratulations on a long marriage and great kids and now, grandbaby.

Susan said…
Happy Anniversary and thank you for sharing your wedding photos. You looked so beautiful and happy on your wedding day.
March 23, 2016 at 6:16 AM

s. said…
Really lovely - thank you for sharing your beautiful memories and even more beautiful present. I hope that some day you will consider doing more posts on lessons you've learned about co-creating a happy union but I feel so grateful that you are posting at all, since you are busy with your new job. Collins and Chandler is just around the corner from my home and your earrings make me ache to go and give them some new business.
March 30, 2016 at 11:07 PM

Duchesse said…
s. IMO there is no one, anywhere, who is better than Pam and Don- and I have looked ;)
As for relationship lessons, I would say that's a book, both of things learned and things I'm still working towards.

Lovely to hear from you; I still have several of the lovely pink enclosure cards you gave me, and think of you every time I see them.
March 31, 2016 at 8:24 AM